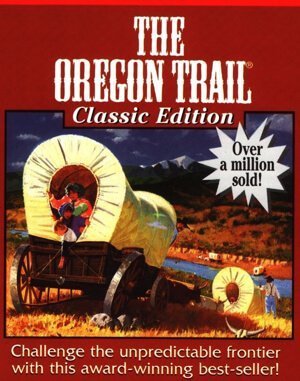 Click here to play The Oregon Trail online
4.1 /5
You will travel west from Independence, Missouri to the Willamette River and valley in Oregon. Can you survive the Oregon Trail?

The Oregon Trail DOS game – As a covered wagon party of pioneers, you head out west from Independence, Missouri to the Willamette River and valley in Oregon. Play The Oregon Trail online here.

You first must stock up on provisions, and then, while traveling, make decisions such as when to rest, how much food to eat, etc. The Oregon Trail incorporates simulation elements and planning ahead, along with discovery and adventure, as well as mini-game-like activities (hunting and floating down the Dalles River).

An important aspect of the game was the ability to hunt. Using guns and bullets bought over the course of play, players select the hunt option (#8) and hunt wild animals to add to their food reserves. In the original version, there were no graphics and players were timed on how fast they could type “BANG,” “WHAM,” or “POW,” with misspelled words resulting in a failed hunt. In the first full-graphics version, players controlled a little man who could aim a rifle in one of eight directions and fire single shots at animals. In later versions, players hunted with a cross-hair controlled by the mouse or touch screen (or the Wii Remote pointer in the Wii version).

Can you survive the Oregon Trail?

Bison were the slowest moving targets and yielded the most food, while rabbits and squirrels were fast and offered very small amounts of food. Deer (eastern section) and elk (western section) were in the middle in terms of speed, size, and food yield; bears were between bison and deer in all three properties. While the number of wild game shot during a hunting excursion is limited by only the player’s supply of bullets, the maximum amount of meat that can be carried back to the wagon is 100 pounds in early versions of the game. In later versions, as long as there were at least two living members of the wagon party, 200 pounds could be carried back to the wagon. In the later version, players could hunt in different environments. For example, hunting during winter would result in graphics showing grass covered in snow.

Throughout the course of the game, members of the player’s party could fall ill and not rest, causing further harm to the victim. The party could die from various causes, such as measles, snakebite, dysentery, typhoid, cholera, and exhaustion. People could also die from drowning or accidental gunshot wounds. The player’s oxen were also subject to illness and death. In the Oregon Trail 2/OT2 for PC and later releases, when a member of the player’s party dies, the player has the option of conducting a brief funeral: If the player elects to do so (as the game’s instructions and in-game advisers strongly recommend in all but the very harshest environments), the player may write a tombstone epitaph for the party member before continuing down the trail; if the player declines to hold a funeral, the party suffers a severe blow to morale.

At the conclusion of the journey, a player’s score is determined in two stages. In the first stage, the program awards a “raw” or unscaled number of points for each remaining family member (weighted by party health), each remaining possession (weighted by type), and remaining cash on hand (one point per dollar). In the second stage, the program multiplies this raw score depending on the party’s initial level of resources determined by the profession of the party’s leader; for example, in the Apple II game, a banker starting with $1600 receives no bonus, the final score of a carpenter starting with $800 is doubled, and the final score of a farmer starting with $400 is tripled.

You can play The Oregon Trail online here, in web browser, for free! 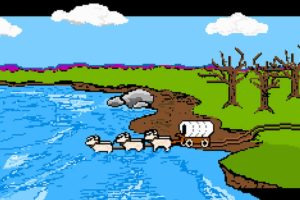 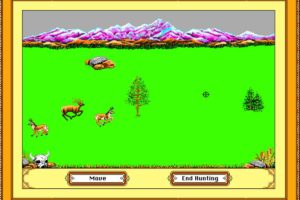 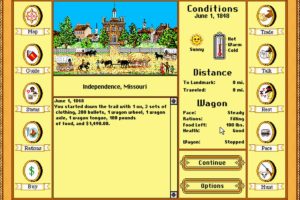 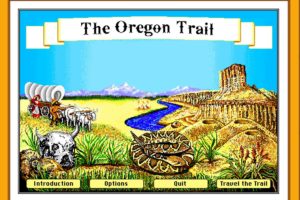