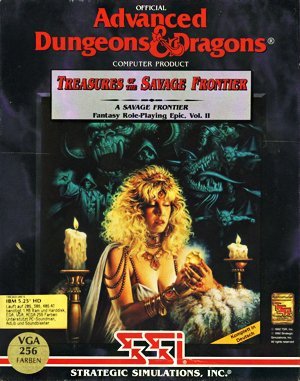 Treasures of the Savage Frontier

Click here to play Treasures of the Savage Frontier online
5.0 /5
After the party's victory in Gateway to the Savage Frontier over the forces of Zhentil Keep, evil forces stir once more with a new plan to discredit the great city of Waterdeep and plunge the region into civil war that only these heroes can dare to stop.

A few weeks after the events of Gateway to the Savage Frontier, the mage Amelior Aminitas magically summons the party (by now called the “Heroes of Ascore”) to eliminate the (apparently) last remaining troops of the Zhentarim from the dwarven city of Llorkh.

Afterwards, the party is given a seemingly simple mission – to protect ambassadors of the “Lord’s Alliance”, which holds together the different cities of the frontier. However, the ambassadors are kidnapped, the Zhentarim and its allies (the Kraken Society and the Hosttower of the Arcane) plot to break up the alliance to conquer the region, and the party is framed as traitors.

The sequel to Gateway to the Savage Frontier is a role-playing game using SSI’s standard Gold Box gameplay system. You can import existing characters from playing the first game. The game is viewed from above, as you move your party into mystery, buildings and combat. The game now includes weather changes that affect movement and NPC interaction.

The game, based as it is on the Gold Box engine, continues to use the grid-based, 3D system wherein the world is viewed from a first-person perspective with 90° turns and movement spaces. As with nearly every Gold Box game, party members were displayed in the upper right hand corner along with hit points and armor class. Random enemy encounters would provide combat opportunities within the game against mixed groups of foes, providing experience.

When combat would start, a tactical turn-based system was used to display the battlefield viewed from an isometric perspective. Every member of the party including each monster were shown as individual icons that had a limited number of moves onscreen. The player was challenged to maneuver their party on the map, take cover behind obstacles such as wells, or even block doorways and act as tanks in order to protect their spellcasters.

As this game was developed some time after the previous Gold Box titles were, it had also followed their lead in terms of its of copy protection by eschewing the cumbersome translation wheel that had been initially used.

You can play Treasures of the Savage Frontier online here, in web browser for free!

Leisure Suit Larry 1: In the Land of the Lounge Lizards VGA

Empire II: The Art of War