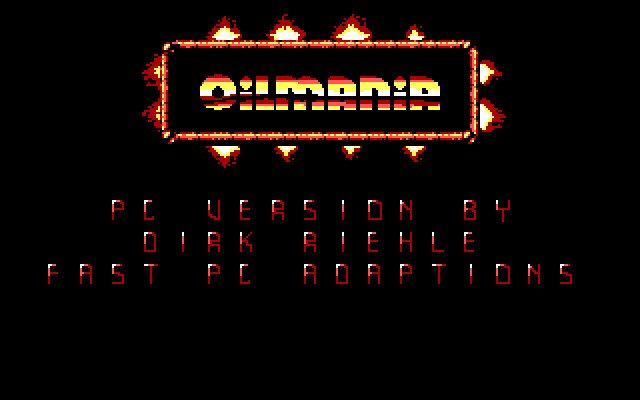 In 1990, CompuTec Verlag released a Puzzle game named Oilmania. You can play it online here.

Apparently, one of the variants of the game Oil's Well, but with some narrative justification. To understand it has failed, but the point apparently is that we need to save the oil resources of mankind.

Common sense and even the look of the game very much similar to Oil's Well: you need to launch a kind of "drill" (or pipe?), able to bend, into the underground mazes in order to pump oil and avoiding different hazards. But if Oil's Well (we are talking about the option in 1990) of these hazards were not so many (insects and bombs mostly, as we remember), here is a nightmare: there are "mouthed" balls like Pac-Man' (!), and some fun riding through tunnels of green creatures and something like ghosts, and lots of everything else. And the effect of their impact on the drill and "drill" are different: someone will die from contact with the "drill", but will destroy the drill itself, if you touch him (therefore, just like Oil's Well, you need to constantly follow the movement of creatures through the maze and periodicals to "pull" the drill ago), someone – quite the contrary. Naturally, the time for passing each level is limited, for passing it is necessary to pump all the available oil (extra points can give the murder some creatures), and each level is much complicated than the previous.

The graphics are, unlike Oil's Well, very dark, and a strange headband with a monkey like that in this world there was something bad; so no funny episodes in this game, unlike its predecessor, will not. And, as mentioned above, it really is terribly complicated (much more complicated Oil's Well, which in itself is not an easy thing) and requires just an amazing reaction.

Sorry, more to say nothing special, because the game essentially just complicated the development of ancient ideas.

Do you want to relive your memories and play Oilmania online in your browser? Play it now for free.