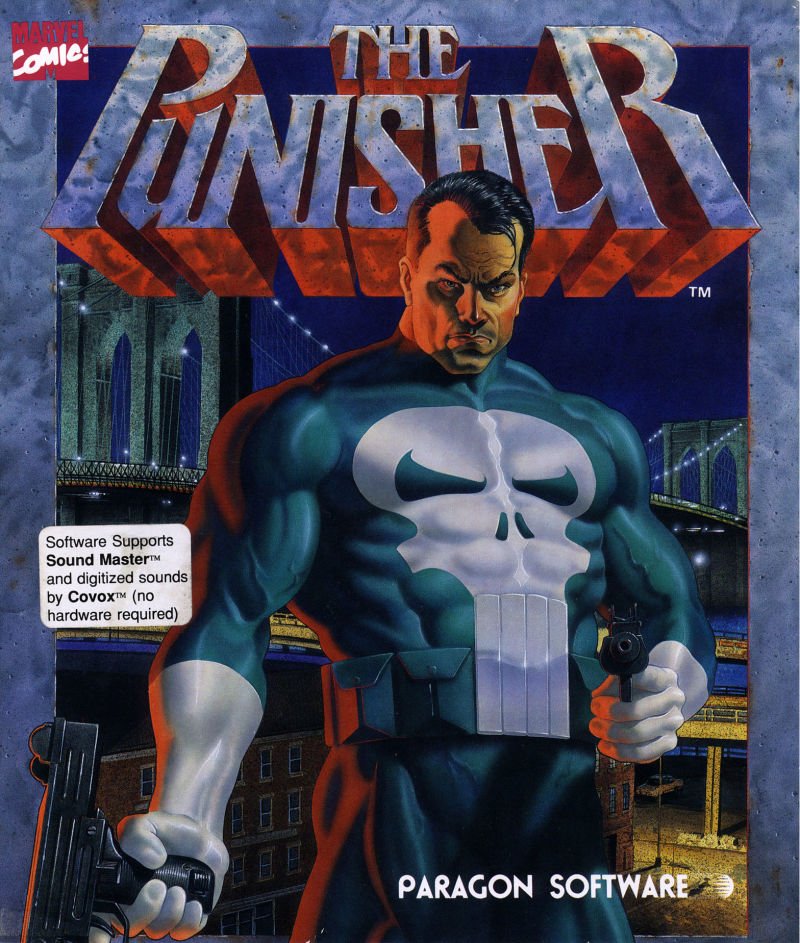 Developed by MicroProse Software, Inc. in 1990, The Punisher is a perfect Action game which ruled the arcade for several years. You can now play it online here.

Another multi-genre comic riot from Paragon - this time about Frank castle, the Punisher.

Frank was a COP. Honest. Good. Do not take bribes. Imprisoned bandits. He had a wife, two children. They loved to walk together in the Park - Central Park in new York. But once ran on the "arrow" of the two gangs -- and as a result got caught in the crossfire. Frank was seriously wounded, but survived. And his family in front of him turned into a bloody splatter.

Since then, he became a different person. The man with the skull on his chest. Man, bringing justice to the darkest corners of America, the Punisher, whose retribution will overtake anyone who breaks the law.

He is assisted in this chain of informants - having before him the debts of bandits, trying to persuade him to spare them; his faithful companion named Microchip, collecting for it equipment; various police, unable to pursue the villains because of the corruption of colleagues. And then one day, he offered valuable information - device security on the basis of Wilson Fisk, one of the kings of the underworld of the MARVEL universe in the comic books which made this game. For these plans, he asks nothing at all - half a million dollars. But they need to GET.

With that, the game begins. Microchip formulates the tasks of the Frank - there is an arrow here, the Armory, and here hides a fugitive serial killer from another state. Frank sagely nods, sits behind the wheel of a true battle wagon and sent it...

City tour is highly interactive - the same engine used for the pursuit of the fleeing bandits and involves remembering the exact addresses of the suspects. After that, Frank goes to walking the course -- and the other engine. The view from the top you should already be familiar - on the same engine work Radomskie same X-Men 2: Fall of the Mutants. A simple walk through enemy territory with a mandatory shooting everything that shoots back. The capture of trophies and trapping or shooting suspects leads to the assignment and replenish the party funds-sometimes throws up more money for certain tasks and the mysterious Committee, consisting of the rich, willing to sponsor for an operation like ours (they contain, for example, Moon Knight ... but his comics are much less popular, and games have not been marked).

And if you have to do the work under water -- Yes, Yes, Frank is a former marine and not so able! -- the view is from the side, and we may have to fight with the sharks... or other diving.

And when the money will be collected, we are facing a long and painful conversation with Mr. Fisk about his criminal plans...

Like other games Paragon, this has not spared them eternal problem. On paper the concept is crap and antihistaine awkward interface; not to mention the simple difficulty of each run of the second game (so, X-Men Madness in Murderworld I was not able to run on any test machine) or their propensity to crashes and freezes without warning.

However, after the Amazing Spider-Man, it is the second luchshesti their attempt igroizatsii legendary comics publisher MARVEL -- and only, for the next fifteen years, specifically on this character.

Summary. Difficult to learn but addictive game... for those who are interested in the source or the character (I have to say - the recent film quite consciously reacted to the original story); for those interested in cross-genre wonders... and for collectors of games, awarded the honor to be banned for sale in Germany.

Relive your old memories by playing The Punisher free and online on your browser now.

Secret of the Silver Blades