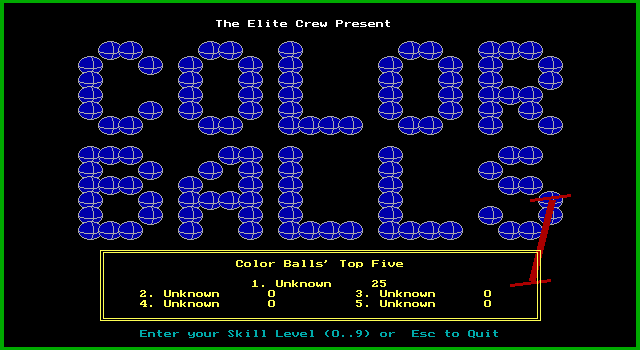 A very interesting DOS game was released by The Elite Crew in the year 1992. The game was called Color Balls. You can now play it online.

Another Tetris-like game with a modest design and immodest complexity. Color Balls is a completely original spirit of the thing, which I do not want to put on a par with the standard "colorful-ball" puzzles, despite the "bearded" gameplay familiar to any person who is faced with a computer classic.

All very, very simple: a glass falling on the three in a row balls, able to change places, several levels of difficulty – from beginner to the ninth (of course, they differ in speed). Anything unusual, it would seem? Let's start with the fact that glass is not just a rectangle, and a complex structure, within which the same colored "balls" (characteristic line is associated with them) are formed honeycombs. They disappear in the case of making plain in a series (minimum three pieces), or triangles. Probably without the possibility of building the last Color Balls could be lost on a shelf marked "hardcore infinite", because even pass the first level hard enough. The game involves balls of seven (!!!) colors, and that's it. You are guaranteed active work of your fingers, brain and reaction test.

It is no exaggeration to say that graphically, the puzzle is, if not the grandparent, then as a veteran, exactly. This fact could be attributed to the shortcomings, after all, a game, born in 1992, have a much more attractive appearance, however developers hardly cared about this moment – the focus was on the idea. And in the puzzle graphics rarely plays the first role. It may seem extremely awkward to manage, especially those who do not have individual unit numbers on the keyboard. On the right side of the Cup for convenience is a list of buttons to be reconfigured which is not possible – it's really a minus. As for the rest – quite "playable" thing, a sort of exercise for the brain. Acute recommendations to fans of the genre is not given, but collectors certainly confirm its value.

Not sure how to pass your time, why not play our classic videogame Color Balls online? And the best part, it is for free!