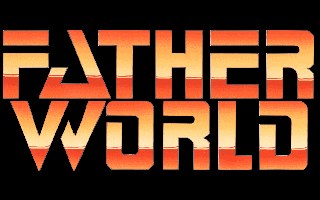 Do you think old video games are boring? Play Father World, it is a Side view perspective game developed by TWIM and released on DOS in 1994. You will then know that you were wrong.

Korean Adventure with elements of action and platforming, even made as a parody (as you might think after reading its name), but rather as an imitation of the cult game Another World - unfortunately, the imitation is not flattering.

The plot is compared with AW is very conventional and generally "good for nothing": you play for a certain brave hero in a certain kiberpank the city of the future, battling against the minions of some demon, eager to seize the Land because of the authorities against Horny uncle in a red Cape is powerless. The game has a side hero like appearance and, for example, gait very much resembles the protagonist of AW, but by itself this thing is much less complicated and far more repetitive with the battles there, but quite a few jumps (although the reasons to exercise acrobatics still will), but the basis of the gameplay consists of wandering around locations, half-pixel-hunting, and even NPC dialogue (in Korean), though not particularly elaborated.

The graphics in the game are pretty simple, even for its time, drawing is not too clear, but the atmosphere does not suffer. It is necessary to note the presence of the in-game story scenes (primarily colorfully showing us options the death of the protagonist), traced somehow in the style that is suspiciously reminiscent of anime. Overall - not as bad as it could be, but the interest is mostly historical.

Do you want to relive your memories and play Father World online in your browser? Play it now for free.

Ulysses and the Golden Fleece