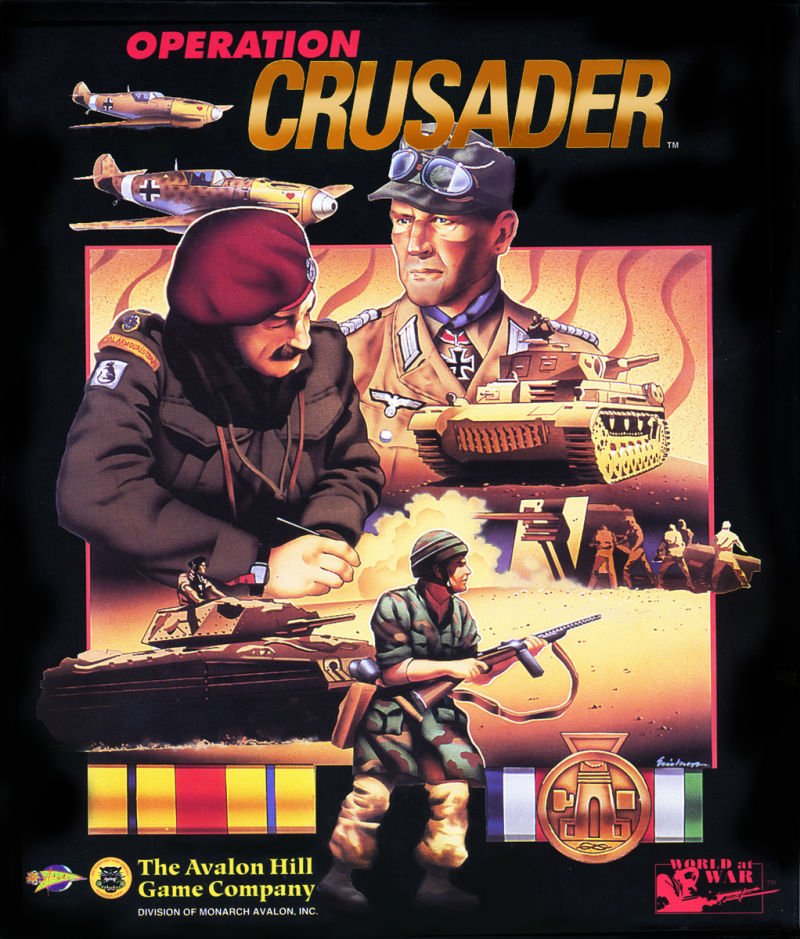 Great news for all the old video game lovers, now you can play the best Strategy/Tactics game, Operation Crusader launched by Atomic Games, Inc. in the year 1994 again. Play it online now.

Wargame on engine V for Victory, dedicated to the operation "Crusader" (Crusader) during the Second world war that took place in the second major offensive of the Axis in North Africa (this time – mostly German led by Rommel); read more about this operation, it is possible to learn even from school textbooks, so the background will not stop. A choice of two game modes: random scenario, of which there are five, and the campaign. In each mode you can play both sides of the conflict, i.e. for German-Italian and British troops.

Of course, all military units are displayed on the composed of such nice eye "hexes" as various in form and color symbols to represent different types of them. When you click on each icon to get information not only on type but also on the distance between the unit and base, conditions of supply and level of fatigue soldiers. One of the interesting features can be identified at any time, view current weather condition and forecast or, for example, the ability to view the unified statistical report the status of all units after the battle. Regarding the weather it should immediately be noted that there is a very important factor is made as diverse as possible given the sub-genre of games (i.e. there will be sandstorms, and fog, etc.). The landscape in the game is also plays a role, but it should be noted, significantly less than the weather conditions.

But the main thing – in this game you have the so-called "adjutant", which can be accessed when and as many times on a number of issues that is before us is almost an incredible game – a wargame and not the easiest in every sense, but at the same time with a very friendly interface and a good help system that you can really learn to play relatively quickly. For example, the "adjutant" can be charged fully control the movement of units in the game, although you can (and should) do it yourself. The types of movements happen four types: strategic (quick throw on the roads in the absence of enemy troops nearby), tactical (slow moving with constant combat readiness), division (used rarely and only in case you have actually divisions), directly offensive.

Also noteworthy are two other points of the gameplay. The first war is happening in the desert. This means in particular that the role of the supply troops is very large, so other than fighting, you have to constantly take care of the delivery of ammunition to one or another unit. The second point is really high enemy AI, able to think outside the box (even using a disguise!) and forcing the player to do the same. Naval battles and ships in the game, but the aircraft is, and the role of air operations in a game during the allotted considerable, so this point is briefly to touch upon separately.

The majority of air operations are comprised of raids on facilities of the supply system of the enemy and directly into columns of its troops to reduce mobility (and strength at the same time) enemy armies. However, aviation has another important function is reconnaissance. The longer we keep our force, the more our visibility and knowledge about the actions of the enemy (because the game has a "fog of war"). Dogfighting will not be – the aircraft consists exclusively of bombers. Directly control the aircraft plainly cannot – you can only send them to specific job and order if necessary to return to base to refuel. This whole process can also be relegated to the "adjutant," but that might be a bit dangerous (because often he sends the aircraft to the base for no apparent reason). The pilots, like the infantry, there are also indicators of fatigue, morale; in addition, the success of departures is influenced by weather and activity of the air defense of the enemy (they have...).

Another important point is the so – called "zone of influence", that is, areas in which specific units to fight, while being at the same place on the map. This zone can vary: for example, it decreases when the company makes a strategic move (because for this it needs to build a column), but increases when the soldiers take the defense line of fortifications. In addition, motorized and mechanized troops always have a smaller zone of influence than "normal" infantry, because in the desert they move harder. And given the fact that these units demand supply often, as well as what they are – the main striking force in the game, it becomes clear that the play will be (not in terms of management, but in terms of decision making) is difficult. Please note that units caught in the zone of influence of an enemy squad in this game don't begin to attack yourself.

The four types of attacks: reconnaissance (just to obtain information about the dislocation of the enemy with minimal losses), the attack without a prior maneuver (actually a small reconnaissance sortie from the Fort or fortifications), normal attack, and attack in a part of the front, i.e. a major offensive with all available forces.

The actual types of units in the game not just many, but very many; to list them all, as well as their features and interactions between them, it would not be possible. It is only possible to refer briefly to, for example, that the units here can be easily combined and split, including with the aim of improving their "quality"; there are separate groups of military engineers, which can, among other of his duties, even to restore partially destroyed captured enemy fortifications; and so on. Still, not to mention that at some point the preponderance is on the side of the British, and although everyone at school knows that in real history it was, are the cause of some "fabulous": in one not so fine for the Germans, the day in the rear of the English lands of the new Zealand team, consisting of aboriginal-Maori, able to keep fighting at night, which no other troops on both sides can not. Exotic...

Perhaps, about the schedule this time to talk, certainly not worth it. It is here, moreover – the picture even the color. For wargame more certainly not necessary. Verdict – Operation Crusader is not just almost unanimously recognized as one of the best or even the best wargame 1994, because the thing is really sophisticated, Mature, truly challenging, but in terms of gameplay, not interface. In short, the true fans of this kind of games will from her ecstatic.

Do you want to relive your memories and play Operation Crusader online in your browser? Play it now for free.