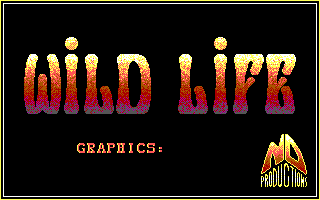 Wild Life is a Action game released by New-Deal Productions S.A. in 1990. It is an interesting DOS game and a must play for all old videogame lovers.

The action of this fascinating and unusual game that is a simulation of hunting in combat in the first person (!!!), occurs in about 20-ies of the last century. Your hero is a reporter of a certain Zoological journal, is sent to four of the expedition in the snowy wastelands of the Arctic, the prairies of North America, the jungles of India and the deserts of Australia, in order to obtain images of at least a rare rare animals in their natural habitat for profit magazine and benefit of world science.

All expeditions are available immediately after the start of the game – you can choose any. As is clear from the first paragraph, no violence against animals you shall not do: your task is only to photograph them, and in any case not to kill. The movement of the character is carried out automatically from left to right across the map. Species in each locality a lot, but your task is to photograph only three specific types that are listed in the starting job before the mission. However not the fact that these animals once you are caught, they will have to find and make sure that it is exactly the same (here using a sort of "animal cards" is a separate option in the game, which you can see part description (not all) needs of animals and their habitats).

But, unfortunately, not all people in this world are set up as peacefully and friendly towards our younger brothers like you. In each area you will find a huge number of hunters (although they will encounter civilians) – as the natives of those places, and rich white idlers who have fun killing animals. They appear on the screen, suddenly jumping from below, and attacking you, but fortunately, their attacks can have time to Dodge, and you can answer – because you have a gun.

As mentioned, your goal in each mission is photographing three specific animals, but each of them need to be removed three times. Thus, you need to eighteen (not nine, but twice – just in case) camera, the camera, pyatidesyatimetrovy lens and the lens for shooting small or far away from you animals; all of the above must be collected prior to the passage of the mission, to be able to pass it.

The game interface is quite simple and is represented by a horizontal bar at the bottom of the screen. There are buttons for switching between an ordinary camera and camera lens, as well as on a shotgun, if you need to repel the attack. The death of the hero does not come with one shot, and the condition can be corrected, if you collect health packs, randomly lying on each of the areas in the game (their number is also displayed at the bottom of the screen).

Graphically, the game for years after its release it looks just wonderful and juicy, and the brightest palette of colors, detailed image of the drawn landscapes, people and animals, and most importantly – astonishin way to feel the distant scent of the era and the romantic wanderings in unknown lands... Plus, due to the availability of information about the animal game carries educational value and can be recommended even to children.

Finally, not to mention that Wild Life is one of the rarest DOS games ever released, was found recently. So to pass that perfect vintage diamond is in any case impossible.