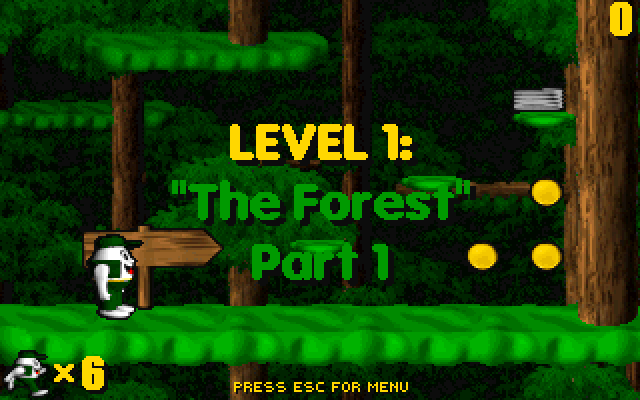 A DOS game was developed by Humpty's and then released by Craig Hall, Daniel Brady in 1998, the game was called Humpty's Scramble. Now you can relive the memories by playing it online here.

A little-known advertising platform, created by order of a chain of restaurants Humpty's and distributed by unknown means (possibly among the visitors to these institutions); again, the game has become available to mankind only in the second half of 2018.

The plot is simple to primitive: anthropomorphic egg Humpty and his younger brother Hammlet walked through the woods and to my misfortune, met with the evil wizard in a purple robe; he snatched one of them (whom we first chose as his alter ego) with the banal and terrible purpose (to eat!), well, our task is to rescue his relative from the clutches of the elderly Gastronome.

The prospect of a review for most of the game is standard for the genre — the side view. The hero has several lives, the number of which can infinitely increase by collecting figures that are identical to the protagonist, however, any health is absent: the slightest physical contact with the enemy or "trap" leads to the death and if there is mentioned "life" — revival at one of the "saving points", presented in the form of wooden planks on poles. Character there is only one skill — jumping; with its help, that is by naprawianie top, he can kill one of enemy types — crawl along the ground spiders (shown is absolutely bloodless — arthropods just vanish into thin air). All the other hostile creatures of the same spiders hanging on their webs and occasionally dipping in and, sharks, bats — can only be avoided one way or another.

Bonuses, besides those already mentioned above additional "lives", represented by the egg yolks and several varieties of eggs cut in half, but they only need to increase accounts (each type gives different number of points); large half egg with a question mark in the center, or teleport, delivering to any point of the level, or the so-called "double point" for some time, giving the opportunity to gain two times more points for each taken the bonus, but driving to see the picture upside down.

The action will unfold not only in forest but in caves, and even under water (where the protagonist, surprisingly, can be arbitrarily long); it's immediately worth noting that the revival in this body of water in the presence of "life" happening in the same place where we died. The dangers are in the ground with spikes and a small forest lake, which sometimes there are sharks, there is only visualized in the form of fins; however, getting into such "shallow" water, regardless of the presence there of animals means instant death, which is strange considering the mentioned trouble-free existence of a hero in the water "deep" (which features shark — already looking quite "full" — that is required to carefully amplivate, sometimes even using any kind of logic).

The mechanics of the jumps are not particularly difficult: the platform is small but the same size and usually located on the standard (and quite overcome by the protagonist) distances from each other; a deadly bottomless abyss if they do, it is very rare. However, moving elements, sometimes also located on the hazardous environment that is present; will need to climb vines and ropes (including rolling), and sometimes jump on them with platforms that can be difficult. It is worth noting periodically stationary springs, allowing you to really make "long" jumps — but, unfortunately, not always clear to us in advance of the trajectory.

However, all the above is true for the "first" part of the game consists of five levels. "Second" is the same, including two stages in the wizard, is a kind of "bloodless action" with the first person in the style of "almost 2.5 D" (that is, to a pain native low oppressive ceilings and a dull monotonous corridors!). The hero has no weapons, but the ability to jump; the goal is to collect keys to be able to go further in opening their locked door, and Dodge the several types of lights (like flying, or, say, firing from the walls at regular intervals, and "crawling" — the latter just required to jump; no other enemies). All types of power-UPS, including additional lives, still available to collect.

Graphically for 1998, all looks, perhaps, simply, but for once it started working like the picture quality — the most it. The character sprites are relatively large and even detailed; effects a bit, but those that have (for example, floating clouds in caves — Yes, don't be surprised), no rejection does not cause; except that the platform-the stones in the underground stages blend in with the background much stronger than their counterparts — the leaves in the forests, making them sometimes difficult to see. "Rollers" between the path segments presented static pictures showing the preparation of a wizard brewing brother of our hero, but nothing creepy there, again, will not occur. In General, for an "average" (as in complexity, and quality), and, compared with the average promotional games — and does a great platformer, valuable including their rarity.

Have you ever wondered what kind of video games were played in the good old days? Try playing Humpty’s Scramble online now and we are sure you will not stop playing again.