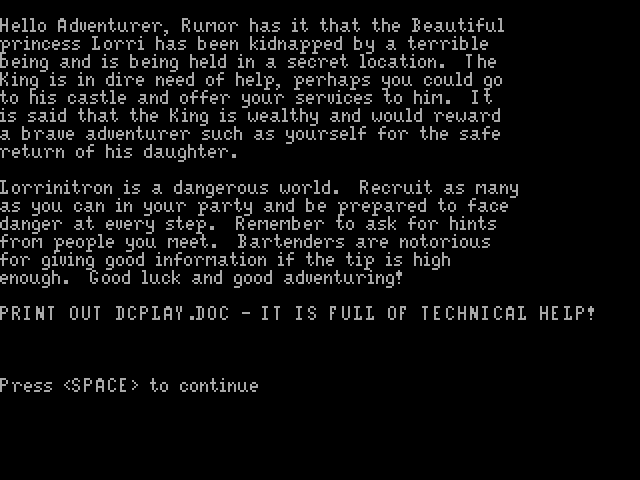 Want to play some nice classic game? Play The Rescue of Lorri in Lorrinitron, Top-down perspective game, from the famous developer BC Software, released in the year 1991, by clicking here.

The Rescue of Lorri in Lorrinitron description

Little-known RPG that I recall the first part of the Ultima series.

The game's plot isn't very original. Princess Laurie from the Kingdom of Lorentson kidnapped by unknown with unknown purpose. Father Lorrie, king Alteon called you and gave the task to find the Princess and punish the perpetrators.

In the game there is character generation, where you select the name, class and distribute features. Classes to The rescue of Lorri in Lorrinitron a bit unusual, as they mixed with the race; a total of six pieces: human, elf, dwarf, mage, Archer and fighter. Man (human) - base class that does not have any bonuses and penalties. Elf (Elf) - very nimble fighters, able to cast spells, but to pay for their mobility strength: they can't wear heavy armor and generally limited to carrying cargo. Dwarf (Dwarf) - dwarf cave dwellers, very strong and durable, can wear any armor, and know how to handle all types of melee weapons, but they are absolutely ignorant of magic and are not trained to shoot a bow. The magician (Wizard) - people with an innate ability to magic. Their high intelligence allows them to quickly gain levels and more skill points. But, unfortunately, sitting in magic books and even leads to mental development, but negatively affects the physical, so mages can only wear light armor and use the most simple weapons. Archer (Archer) is a fighter who has focused his training on the ranged weapons. And although he can't use heavy weapons and shields, but dressed in light armor, fast, accurate and agile, the Archer can deliver a lot of problems to any opponent. And finally, the last class is a fighter, a real killing machine, trained to use any weapons and armor. And, of course, his situation is the reverse of the magician: reinforced exercises with the weapon allowed him to develop mentally, and if the magic weapon the fighter can still somehow use the magic rings and amulets cause him stupor.

Every character in the game has the following characteristics: strength, speed, accuracy, dexterity, intelligence, magical power, and hit points. Power (strength) - affects melee damage and maximum load capacity. Speed (Speed) - affects the number of hits dealt by a character in one turn. Accuracy (Aim) - increases the chance of ranged weapons. Dexterity (Dixtery) allows you to avoid enemy attacks. Intelligence (I. Q.) - the higher it is, the more magical power the mage gets at higher levels. Magical power (Power) - is spent on casting spells.

The game world consists of open spaces and settlements. In the towns and villages you can buy weapons, stock up on provisions, talk to interesting people or to take a side job. Open space consists of forests, fields and rivers where you can meet different monsters and other opponents.

Given the similarity of the game series Ultima, you can imagine her graphic design. Control in The rescue of Lorri in Lorrinitron also standard: move the arrows the actions with the keys, but when pressing the F1 key, you can see list of all the shortcuts, but also choose the desired action from the list.

In General, we have a game with simple graphics (16 colors, and the yard 1991), with a formulaic plot, but deep gameplay, so it should definitely please fans of the classical Ultima line.

Now, play The Rescue of Lorri in Lorrinitron online for free on your browser and make your boring weekend fun and full of entertainment.