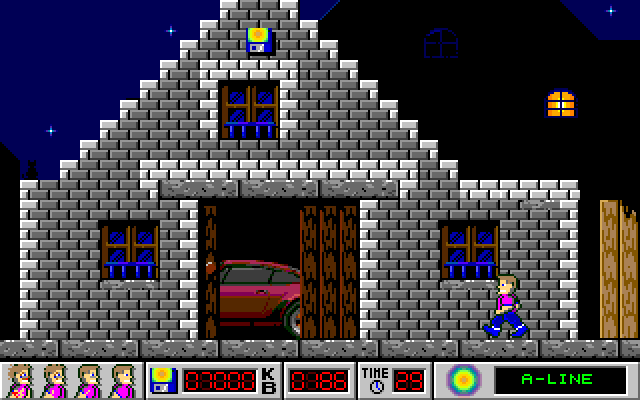 With many different features and various levels, NashuMan released in 1995 hit the right chords right from the beginning. Play this excellent Arcade game and online now.

Advertising platformer interspersed with mini-games created to promote the products of North American company-Nashua, engaged, for example, the production of cartridges for printers and floppy disks. For achieving record results even offered real prizes.

The name of the protagonist is identical with the name of the game, is a young man who is going to travel through five levels, collecting floppy, and opponents as such here - all obstacles are static. To move to the next level you must score certain number of points, which here is the amount of floppy disks. For example, to successfully overcome the first step is to gather media for a total volume of ten megabytes. Some of them get not so simple - many of the obstacles are not obvious and we can observe a decrease in the number of lives even in seemingly completely ordinary situations when nothing portends. But is all floppy and can not collect: on each level there is a mini-game where you want to fold picture, which in the case of successful completion will give bonus points.

The game looks not exactly clumsy, but confused by the lack of smooth scrolling screens that are not fixed, but the transition between them is a break for “moving” camera. That forced the authors to use such an archaic technology whose application here is not justified, is a mystery.

In the end, we have before us a short platformer advertising orientation (with the products and General information about the company here we can also see in a separate menu item), performed in a slipshod manner, receiving damage from unseen obstacles and inconvenient scrolling of the screen can cause irritation. Released by a rival company the Verbatim Top Challenge was much better.

Have you ever wondered what kind of video games were played in the good old days? Try playing NashuMan online now and we are sure you will not stop playing again.