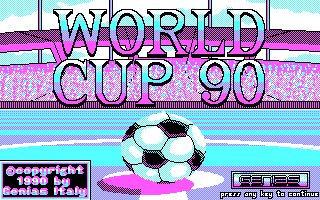 Rather, the football arcade game than a football simulator created, as you might guess from the title, the world championship of this sport 1990, held in Italy. The game includes only real who are qualified for the tournament teams but all the players are fictitious, because the license from FIFA this thing had. There are different game modes: friendly matches, or championship; to play for either of the teams, as well as to choose your own opponents.

Prospect review - "flat", so to speak, isometric: you are watching the playing field from above and slightly to the side, with a small height. There is an automatic - moving players on the field - horizontal scrolling of the screen. At a specific point in time, you can control only one player on the team (marked with an exclamation mark above his head) - logical, that which is closest to the ball. To manage the goalies, apparently, not full. Some of the rules such as throw-in from the sideline or playing the ball in center field, followed, though anything serious from this game, this plan should not be expected - on the pitch, even the referee; substitutions, real tactics or anything like that either.

Formally, however, it is possible to create your own team, making up her name, the color of the shape (really the choice, to put it mildly, very limited) and even conditional tactical scheme (which is either in fact not affected). You can play against the computer or together on the same keyboard. Graphics is only CGA, modelki players (different teams differ only in the color of the t-shirt) small and to a certain extent conditional, but consider where the head and hands, after all, quite possible; goalkeepers are different from outfield players; there are tribunes, representing, however, is a mess. The main feature of this game is phenomenal rarity of its DOS-version - find it in Internet for free access to posting on our website was impossible. So if you are not a football simulator, then at least as an incredible artifact to pay attention to World Cup 90 costs.

Tired of your same old routine, want to add some entertainment and fun element in hour life? Play one of the best videogame World Cup 90 online now and change your boring oold routine for good.