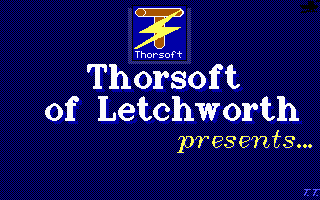 Denarius Avaricius Sextus is a Adventure game released by Thorsoft of Letchworth in 1992. It is an interesting DOS game and a must play for all old videogame lovers.

Quest is quite rare for the genre topic – the history of Ancient Rome. You play as a rich usurer of Pompeii Avaricious, the action takes place in 79 ad, your task – to have time to leave the city before the eruption of Vesuvius (which I know is only you); it would seem that there is nothing difficult, but on your way will arise some situations rigged by your enemies, of which quickly will have to find a way out.

Formally, the game uses a method of text input commands, like many of the old quests, but here you have the alternative to selecting commands from the menu. The dialogues and the available actions in the game quite a lot – it's absolutely classic quest, just completely forgotten. And, as in all such games, there are a lot of jokes of humor, though not always successful.

Graphically, the game is to be honest and Frank, looks weak, even for its time, but playing it does not interfere. My personal assessment – not just because I did not like the game for a number of reasons. However, it should be recognized that oblivion she certainly does not deserve and it may be interesting to all lovers of the old quests.