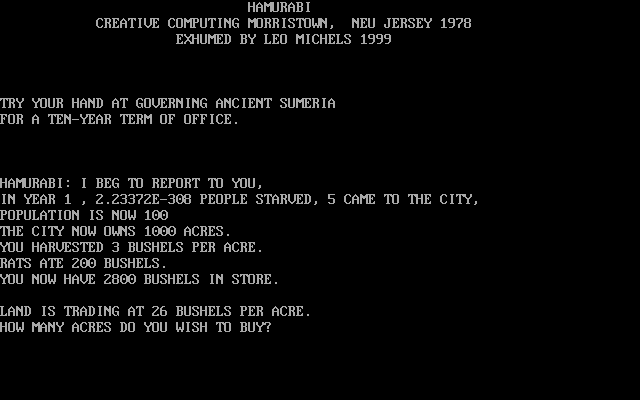 In the year 1996, Hamurabi was launched by Doug Dyment, Leo Michels, David H. Ahl, a top-notch Simulation game with an amazing and engaging Managerial / Business Simulation gameplay. Click here to play it online.

Hamurabi – the "grandfather" of all current economic policies and "simulation Manager". Born in 1968, under the name of The Sumer Game mini-computer PDP-8, later the code was rewritten by David Scarlet with FOCAL'and BASIC (at the same time changed the name of the game Hamurabi) and published in the book BASIC Computer Games. Simple and clear mechanics, simple internal structure, as well as opportunities for modifications provided Hamurabi large number of fans, who carried it further "promotion" on other platforms (and to this day no-no and will be shown made by another lover of the game "based on"). On the basis of Hamurabi was produced and "commercial" versions, one of which appeared on the pages of our catalog – Warren's World Lost Colony.

But let us get back to Hamurabi; in this case, we have one of the later ports for DOS authored by Leo Michels. What is its essence? We have three quantities: the area of fields for sowing, the population (which updated automatically) and a certain amount of grain (measured in bushels); our task is to increase by the end of the game lasting only 10 moves, the size of arable lands and number of inhabitants in the given state as possible. At first glance it's simple, don't. All three indicators are strongly interrelated: for example, grain is necessary not only for cultivation, but also to pay field workers and the purchase of new land. At the same time, the number of people depends on the area of cultivated fields, but with a large population, the growing consumption of bread. And so on. Add to this various other factors like the invasion of rodents, the plague and skipping the fertility of the earth and the whole "strategic depth" hidden in such a simple form.

Management of Hamurabi is implemented through the command line. Each turn, the game asks several questions like "How many bushels of grain to sow?" or "How many acres of land you want to buy?", which, as you probably guessed, you need to answer by entering the desired numbers.

That's all.In short, the Hamurabi is one of the stones in the "Foundation" of the modern gaming industry. And Yes, aware of its existence should every. Even if you are not interested in the genre or discourages external nechistoty games.

Relive your old memories by playing Hamurabi free and online on your browser now.