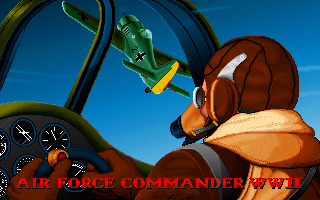 WW2 Air Force Commander, a DOS game was released by the very talented group Impressions in 1993. Little did they know that they will end up making history. Play this game again here.

Turn-based wargame, dedicated to not quite common for such games subject leadership is almost exclusively air force. The action takes place during world war II, the game is terribly rare and the second on a topic developed by Impression Games (the first was called Air Force Commander and was devoted to real and hypothetical conflicts in the middle East).

Of course, is considered the Western front of world war II; however, begins the game campaign in 1944, as perhaps anyone expects, and in 1940 – during the German attack on Norway (as you know, British troops, including aviation, came to Norway to help).

You can play for both sides – the Allies and Germany. The gameplay is largely similar to the previous mentioned game and is step-by-step control of the air force of his country, which include several types of aircraft (bombers, fighters) and air defense systems, because in addition to the attack on the enemy base it will be necessary also to guard their. The interface is also very similar to the interface of Air Force Commander (that is the same complex and at first glance completely unintuitive), and all that was said in the game, fully applies to this. Incidentally, the full name of the game at the first screen – Air Force Commander WW2, so perhaps it is even worth considering as a "standalone-addon" to the Air Force Commander.

Long campaigns don't wait – so probably the game and weighs significantly less than its "predecessor". However, the graphics here was almost better. Of course, since this is a wargame, almost everything depicted is purely arbitrary, but both cards (both global and tactical) colored and drawn, not so bad. And here is a very cute animated screensavers (for example, a meeting of officers at the beginning of the game).

Verdict – interesting, but still very peculiar, even in its "niche" and is objectively difficult to master. So what can be recommended except to those who loved the Air Force Commander.

Do you want to relive your memories and play WW2 Air Force Commander online in your browser? Play it now for free.