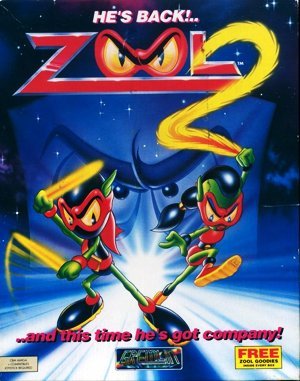 Click here to play Zool 2 online
5.0 /5
This platformer Zool sees the eponymous Ninja from the Nth Dimension joined in his quest by a whip-wielding female companion - and alternate protagonist - Zooz.

Zool 2 is the second outing of Zool, the ninja of the Nth dimension, and features similar platforming gameplay and copious amounts of Chupa Chups lollipop product placement as the original Zool. Play Zool 2 online!

The sequel to Zool sees him take on the bad guys Mental Block and Krool across 15 levels.

Zool 2 is a platform game where you control the titular “Ninja of the Nth Dimension” (or his girlfriend, Zooz, who can complete each level in a slightly different way) as he rampages through a variety of levels, collecting countless tasty treats, shooting any enemies that he encounters and finding bonuses (there’s a variety of special power-ups Zool can find – for example, a bomb that follows him and can be blown up at any time to remove on-screen enemies, or a temporary invulnerability). New to the sequel is Zool’s ability to scale walls and his new spinning attacks.

On each level you have to collect a certain amount of the featured fruit within an allocated time limit, and then find the exit across the multi-directionally-scrolling levels. There are lots of hidden areas to see, including a bonus Breakout game starring Zool’s pet 2-headed dog.

You can play Zool 2 online here, in web browser for free!