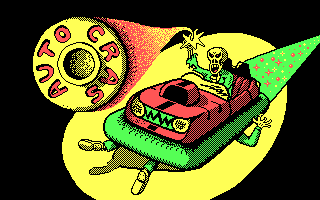 And again we see another Spanish game is a dream. Yes, it is the embodiment of old secret fantasy – and it is well known that Spanish developers have never hesitated to give rein to his most insane – at first glance – thoughts and ideas.

In the court of XXIII century, and harmless fun on the ride "Cars" turned into a bloody fun – brutal gladiatorial car battle in enclosed arenas. To win, you need to survive, and to survive – to win. Our hero pilot one of these machines. And while he is a monster. Yes, a huge horrible green-skinned monster, more like a supervillain Stuff cartoon about the Hulk. And maybe during the game we won't see him, but the joy of the game for such a creature never leaves you for a second. In a guy do you can be sure that he will cope.

The game is on top, its meaning, as has been indirectly said, is to control your armored vehicle and competently to attack other people, to smash them to smithereens and destroy. On the first level enemies a little, but then starts the real madness; moreover, there are even special tasks – for example, to accelerate to such an extent as to knock the opponent off the arena with one blow, or to kill enemies in a specific order. Between rounds have the opportunity to change their car.

Graphically looks Autocrash – this game is more than acceptable. The background, of course, the same arena - but machines are drawn large and clearly. Verdict – this is great, albeit it may seem to some to be primitive. But before Carmageddon another six years, until Bumper Wars – ten... Spain has often been somewhat "ahead of the rest", but know this, alas, was only possible now. But this is just another reason why every fan of vintage arcade entertainment, be sure to read this wonderful game.

Enjoy playing Autocrash online, it can be played on your browser and is free.