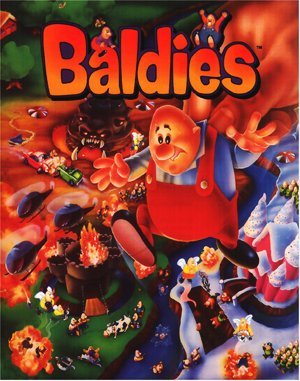 The premise of Baldies is similar to many real-time strategy games. You start with a limited number of Baldies with which you construct buildings, increase your population, and create the necessary instruments of war. There are four classes of Baldies–builders, scientists, soldiers, and workers/breeders. Play Baldies online!

Baldies is a real-time strategy game, and as such is often compared to Command & Conquer or Warcraft. This is true to a degree, and the game does share a similar isometric perspective. However, unlike those games, as the hand-god the Baldies the player does not have any direct control over each unit’s specific actions or movement. Under normal circumstances, Baldies will wander aimlessly around the game world. In this way, the gameplay is more reminiscent of Dungeon Keeper. Also, there is no traditional fog-of-war.

Playing as their hand-god, the player assigns each individual Baldie a specific task that ultimately helps propagate and advance the Baldies’ civilization. This is accomplished by using the hand-god powers to literally pluck the Baldies from the earth and then place them in the various rooms of their small shacks. By placing them in a specific room, the specific Baldie will be assigned a new job or task, denoted by a change in the color of his clothes. Red Baldies are workers, which will generate energy that can be used to terraform the land and to unlock the angel wings/flying ability. Blue Baldies function as builders, which can upgrade the starting house or build new houses. Grey Baldies function as soldiers, and white Baldies work as Scientists. The Scientists will create new weapons and technologies for the Baldies, many of which are created by experimenting on the various animals found in the game world. Examples of inventions include bear traps, grenades, and exploding cows. Eventually, even cars and helicopters will be unlocked for use in the war against the Hairies.

As mentioned, dropping a Baldie into a specific room of a house changes its role. One room of the house has only a bed in it, and an animated Baldies jumps tirelessly up and down on the mattress. Perhaps unsurprisingly, this is the room that must be occupied for more Baldies to be bred. This is an important function, as the player will need numerous Baldies of all kinds in order to overrun the enemy race. This is the main mechanic of the game – constantly shifting the roles of the Baldies so as to most efficiently reproduce, advance technologically, and ultimately destroy the opposition.

In addition to the ability to physically move Baldies, the player can also wield some limited god-like powers. The Flamehead attack allows the player to call down the heavenly fire to smite a specific unit. The player also have the power to bring about Armageddon, which will instantly change every Baldie under the player’s control into a solider and transport them to a small island with every unit of the opposing faction. The last Baldie or Hairy standing wins!

You can play Baldies online here, in web browser for free!