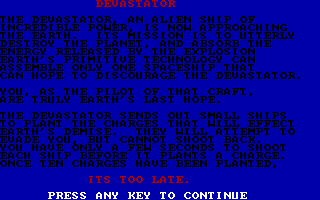 Very old space flying is not quite clear origin (like was the app to some computer magazine). At the event there is a narrative rationale: in the future, the Earth came a huge space ship called "Devastator", the inhabitants of which – evil aliens want to destroy our planet for this and send it to space fighters. However, humans have something to say: only one space fighter of the orbital defense, which is piloted by you personally.

The game is in first person. The basis of the game – fights with enemy ships one on one. When meeting with an enemy you have ten seconds in order to destroy it, otherwise he will release upon the Earth a deadly missile. The earth will be destroyed after ten hits such missiles. If you destroy ten fighters in a row we win the game (i.e. the game is very short, although very difficult).

What should be noticed more – so it is a very beautiful (albeit CGA, of course) for the year of release and origin of such graphics, which have even a little hint of three-dimensionality. So as a verdict can be pronounced only one word: recommended.

Want to play Devastator online now, play it on your browser here.