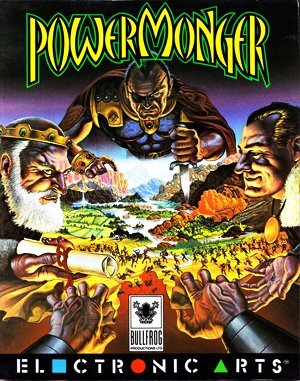 Click here to play PowerMonger online
4.7 /5
An early Peter Molyneux God game. Other people worked on it as well.

Powermonger is a real-time strategy game developed by Bullfrog in 1990, derived from the Populous engine but presented using a 3-dimensional game map. Play PowerMonger online!

PowerMonger takes the basic design and concepts of Bullfrog’s previous game Populous, and places it in a war context. The game cast the player as a dispossessed warlord plundering his way through 195 territories on the way to world conquest. Several other leaders have the same goal.

The gameworld is now made up of polygons, so the view can be rotated and moved with greater freedom than Populous. Trade, diplomacy, inventions, and scorched earth invasions all play a key role in how the player progresses through the game. Two-player games via modem links are available on computer versions.

The game features a 3D game map, although camera movement was limited to rotating the map in 90-degree intervals and 8 pre-defined levels of zoom. Only the map itself is three dimensional, people, trees and other game objects where comprised of sprites. The game also features a fairly advanced “artificial life” engine. Each person seem to have a mind of their own and will go about his or her job, fishing, farming, shepherding, collecting wood or making items without any input from the player.

On death, citizens and soldiers alike would rise heavenwards in angelic form. The player also have a query tool that can be used to see the name, sex, age, allegiance, vital stats, hometown and equipment for any given person they click on. While the player cannot form the land, their actions can still have some limited effect on the environment. For example if the player deforests a big area the weather pattern will change and more rain or snow (depending on season) will fall, making movement slower.

The player starts out on each map with a small number of soldiers, and maybe a few towns already under their control. To win the map they need to tip the balance of power completely to their side (represented by a scale below the mini-map), by conquering all (or at least most) of the towns on the map, and kill any opposing captains.

Once a town is under the player’s control, they can draft the locals into their army and take on bigger towns or enemy armies. Some of the bigger towns also have neutral captains and if these survive the battle and the player conquers the town they come under their command as well. The player can only control as many armies as they have captains so it’s important to keep them alive – if a captain is killed his army is disbanded and his surviving solders go back to their town of origin. Unlike the main army which the main character commands, the subordinate captains have a “lag” time. The further away from the main character they are, the longer it takes for orders to reach them. When issuing orders via the captains, a useful and sometimes amusing feedback is provided: the affirmative voice sample is played at a pitch that signals the wisdom of the player’s commands.

Food is the single most important resource in the game, the expression “an army marches on its belly” is very true in Power Monger, therefore it is often smart to not to draft a whole town’s population into an army, because an empty town will not produce food (or more people). Aside from friendly towns the player can also slaughter wandering sheep (by ordering the army to attack it), barter food from neutral towns, or kill an enemy captain and pillage his food supply.

Aside from manpower and food towns can also provide equipment. Townspeople will occasionally make stuff, but to speed things up the player can order an army to “invent” at a friendly town. Depending on nearby resources and what posture the army is set to (passive, neutral or aggressive) the player’s men will then go to work collecting resources and make items. As the more useful items can usually only be made in one or two towns on any given map these have great strategic importance.

You can play PowerMonger online here, in web browser for free!