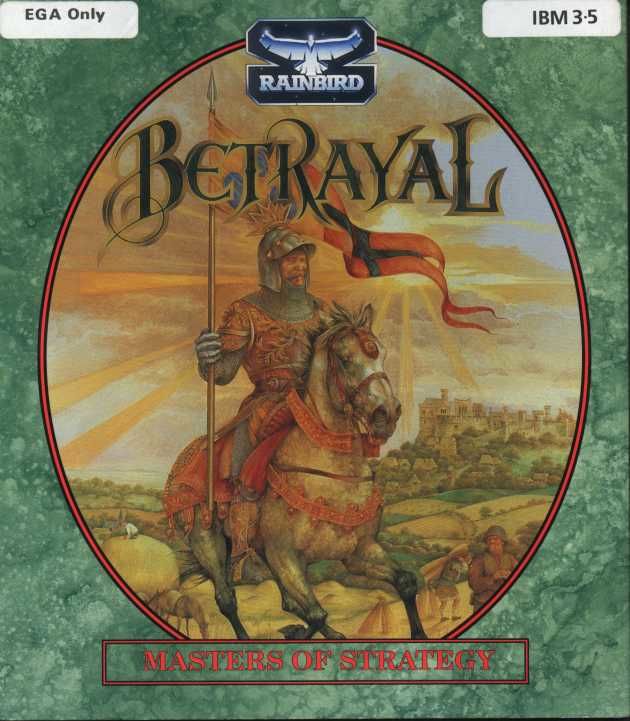 With many different features and various levels, Betrayal released in 1990 hit the right chords right from the beginning. Play this excellent Strategy/Tactics game and online now.

Military and economic strategy in the medieval times, slightly "imitating" Defender of the Crown and, possibly, a "forerunner" Conqueror A. D. 1086. The plot of the game more than traditional you have to play the role of one of four medieval feudal lords struggling in a particular region conditional with each other for the secular and ecclesiastical powers (simultaneously). It is important to note that the world in which the action is Betrayal, is a fantasy in which in addition to people still live and trolls, whose presence in the game to ignore will not work.

The main game play strategy, the global plan – step-by-step (players take turns), but all the battles take place in real time. We are engaged in the construction and arrangement of settlements, gathering scarce resources and the production of them something, the troops training, installation and collection of taxes, and wars (in real time and with lots of troops) with the neighboring lords and trolls and strengthening our borders. There are two strategic modes of play – a global map (where you can see all the land belonging to us with marks in the form of towns and other important sites) and a specific settlement, where our eyes have already brought specific buildings and units. "Micromanagement", i.e., detailed control of each settlement there.

However, there is the opportunity to conduct and fights alone (your warrior against the enemy or Troll), this game mode – arcade game with side view. Reveal the surprise: trolls – not just "perpetual enemies", with specific Troll a lot what you can negotiate...

But most importantly – by the way, because of this, the game got its name, is the abundance of "secret diplomacy" that is probably a much more important element than the economy and military action. Here you can recruit and send on missions of spies (who are able to bring just enormous favor, some see for yourself), you can try with the help of hired killers to eliminate the hostile rulers of the neighboring lands, and you can even Topstitch the denunciation to the king (whose power in the country, though formal, but if you find the right words...) or Church, you can also try to secure their neutrality, or even in the next military campaign against the enemies... in short, opportunities for the implementation of the "talent" scoundrel and schemer in this game is just mass.

To the graphics of the game even after launch, it had a lot of claims, but in this case they are completely unsubstantiated: Yes, the picture in the mode of a global map of the possessions, even for its time is somewhat arbitrary (although bright and clear), but the DOS version is definitely superior to all others (especially for the C64 version where the game was released initially). But what can really disappoint is the relative simplicity of the fights and all the low level AI opponents. Definitely, Betrayal is a complex game can not be called, and those who recognize only a very sophisticated strategy, like it is unlikely.

The verdict, however, is a very good, visually pleasing, easy to learn and exciting game, probably one of the best examples of "adapted" old strategies, perfectly suited for anyone who wants to get acquainted with the history of the genre without the need for lengthy study of the gameplay.

Enjoy playing Betrayal online, it can be played on your browser and is free.