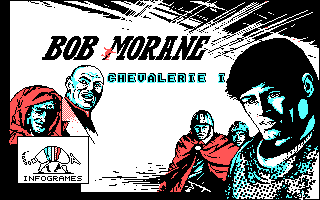 With many different features and various levels, Bob Morane: Chevalerie 1 released in 1987 hit the right chords right from the beginning. Play this excellent Action game and online now.

One of the four games enjoying extraordinary popularity in Belgium and France but not well known in the rest of the world (and completely unknown CIS) "superhero" of the French-speaking Belgian comic Bob Moran. None of the first three in the version for the PC until recently, it was impossible to find on the Internet is true rarities of the French gamedev.

If you try to describe the story very briefly, then: the action takes place formally in the 1950-1960-ies, but often tolerated in other eras (in the comics strong element of fiction); Bob Moran, a Frenchman, a veteran of the Second world war, a first-class pilot, marksman, athlete and so on; he fights against evil in the world along with his friends, of which particularly noteworthy is the narrow-minded, but possessing great physical strength, his main friend Scot bill Ballantine; the evil in the world Bob Moran presented in the first Chinese villain Mr. Minh, better known as the "Yellow shadow" (apparently, despite the fact that the character was invented in 1953, the Belgians did not want to pay a tribute to the Cold war and to give the main villain the most popular in the West nationality for the category of characters), a brilliant scientist who has discovered a way to time travel and is making every effort to destroy Western civilization, but, of course, a brave Moran always stops him.

As already mentioned, Bob Moran was released four games for computers, but a genuine recognition of all of them only got the last game, the most technologically advanced and published in many countries and on many platforms: Bob Morane: Ocean, outside of France known as Operation Neptune. The first game, far more primitive in all respects, were published mainly in the homeland version for PC did not come out of nowhere, with the exception of France.

The game story specifically Chevalerie is as follows: Yellow Shadow went in the XIII century, to steal the Shroud of Turin, which, he believes, will give him the strength to destroy the West. Of course, followed in the Middle ages is sent to Bob Moran. Within a large castle he will have to confront not only the bandits quite modern Yellow Shade, but also the local knights, and even bears.

The gameplay is an arcade shooter with a side view, where the hero needs to fight with various notable opponents.

Graphics in all three "first" games in the series, including this one, unfortunately, leaves much to be desired, especially compared to versions for other platforms, but to tell what exactly depicts what happens on the screen, is still possible. Also note that all the games are in French but text in them quite a bit (in fact, only a brief introduction to the background of the plot, which for the game itself not necessarily understood). First and foremost, the value of these things, of course, a collectible, but it is possible that for fans of the old arcade games these things would be a great gift.