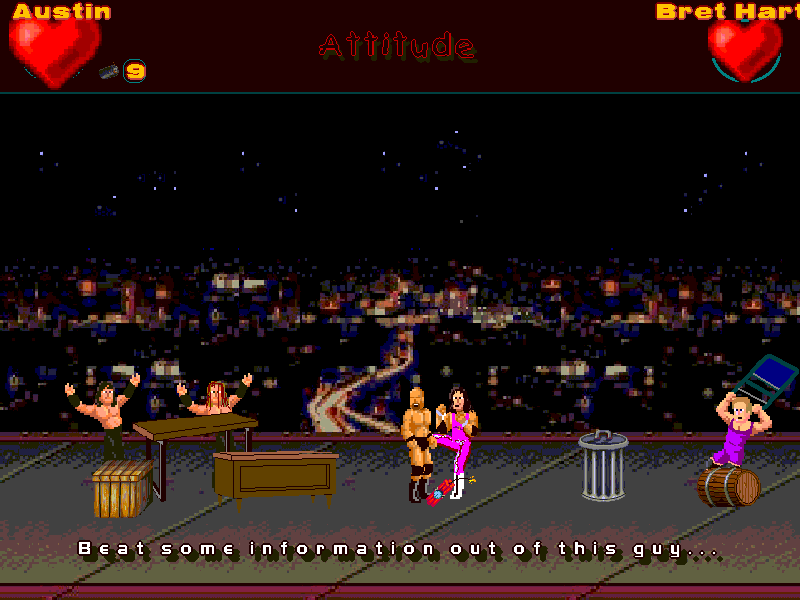 Play Case 3:16, a very interesting Fighting game, developed by - in the year 2000 online on your browser right now.

Case 3:16 (Who Nailed Austin?) is the game related to wrestling, sozdannaya developer MDickie in 2000.

The game is based on the real storyline in the TV show World Wrestling Federation (now WWE) when wrestler Steve Austin was hit by a car. You play as Steve Austin and must find out who did it.

This game is similar to a fighting game: you beat the enemies, before they run out of life, and find out whether this wrestler hit him. You can move left or right, you will see the punch, kick, block, you can throw a beer in your opponent or to apply a super-acceptance "Stunner".

There are three game modes:

Main Game - Austin must defeat 5 opponents and when they will give up, figure out who did it. If the enemy you have finished, the game ends.
Accusations - you yourself choose who you will beat, and investigations.
Dream Fight - a game where you can choose anything you like, where you choose a fighter you want to fight, arena, and special weapons.
A choice of three difficulty levels - easy, medium and difficult.

In the game there are wrestlers like Kurt Angle, Shane McMahon, Bret Hart, Owen Hart, Shawn Michaels, Chyna, Triple H, The Rock, Big Show, Undertaker, Vince Mc Mahon. The game is controlled with keyboard or joystick. Attached is the full description in the text file, which contains all the necessary information. Graphics are two-dimensional, pixel.

This game can be advisable for those who at the time was watching wrestling on TV.

Play your favorite childhood game Case 3:16 online in your browser for free here.