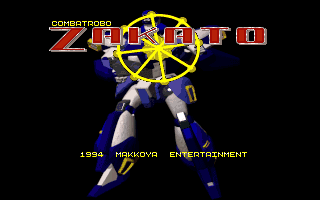 Click here to play Combatrobo Zakato, developed by Nesco in 1994. The game is a high quality Side view perspective game with an amazing Arcade experience.

Korean action from side view, where to play for the winged Gundam. The story most likely is, but because of the language barrier to understand it fully is impossible (and unlikely).

The robot can move in eight directions in the screen, which scrolls, but only vertically or horizontally. To fire you just for me (but, of course, are turning the other way), but from different angles and "queues". The hero can fly, but it can land on a hard surface, if available and to follow it walking. The levels are not too large. Before the beginning of the level (but not before the first, of course), you can choose a weapon and gain some ammunition (note that in this game they are finite).

The enemies are not too interesting - entirely unattractive mechanisms. The bosses are the same - except bigger and harder to kill. Compared to other similar Korean action AMI the game may seem simple, but for an untrained person to imagine the complexity will be. Action executed in a rather clear and bright palette and have a lot of effects of explosions and gunfire, and, unfortunately, monotonous. But the really interesting level design - for example, on the ground, if there's time, you can wrestle with whether we're in the sky or on the roofs of some tall buildings. This is clearly not the best representative of the subgenre, but all the same game level as much above average.

Enjoy playing Combatrobo Zakato online, it can be played on your browser and is free.