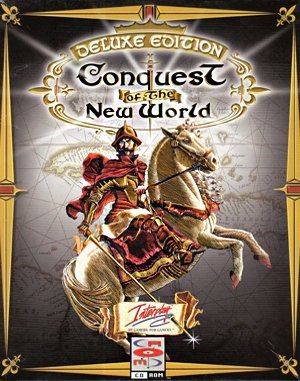 Click here to play Conquest of the New World: Deluxe Edition online
4.3 /5
Players move their various pieces (including explorers, colonists, and soldiers) through a blacked-out world, uncovering mountains, plains, and rivers. Landmarks are named by the first player to discover them. After mapping out some of the local terrain, players must build a colony and make it self-sufficient; to this end, players can build sawmills, metal mines, housing, and farms to generate the resources and space necessary to expand, and eventually, build more colonies. Lastly, players must train armies with which to conquer the other colonists and eventually proclaim independence from their mother country.

Like the original Conquest of The New World, the Deluxe Edition lets you control one of 6 different nations (five European and the High Natives) in their attempt to colonize and conquer a “new” continent.

The game is turn-based, and combat is a mini-game taking place on a 3×5 square battlefield where victory can be achieved by killing all enemy troops or capturing the enemy’s flag. The gameworld is represented in an isometric point of view with three-dimensional terrain features.

Colonies consist of a Colony Centre, exerting an area of control within which all buildings must be placed. Most buildings, including the Colony Centre can be upgraded, adding to their production capabilities. Resources are used for building and upgrading, or can be traded with the natives, other nations, or your mother country.

The Deluxe Edition adds several new features to the game. Primarily it adds the option to create and play scenarios and customizing the world. In addition, nations now have different bonuses, several special resources and discoveries have been added, and you can form trade alliances with other nations.

Victory conditions are customizable, so the game can be played as a pure conquest game with the last nation standing, being the winner, or as a more peaceful race for victory points to a pre-determined score.

You can play Conquest of the New World: Deluxe Edition online here, in web browser for free!