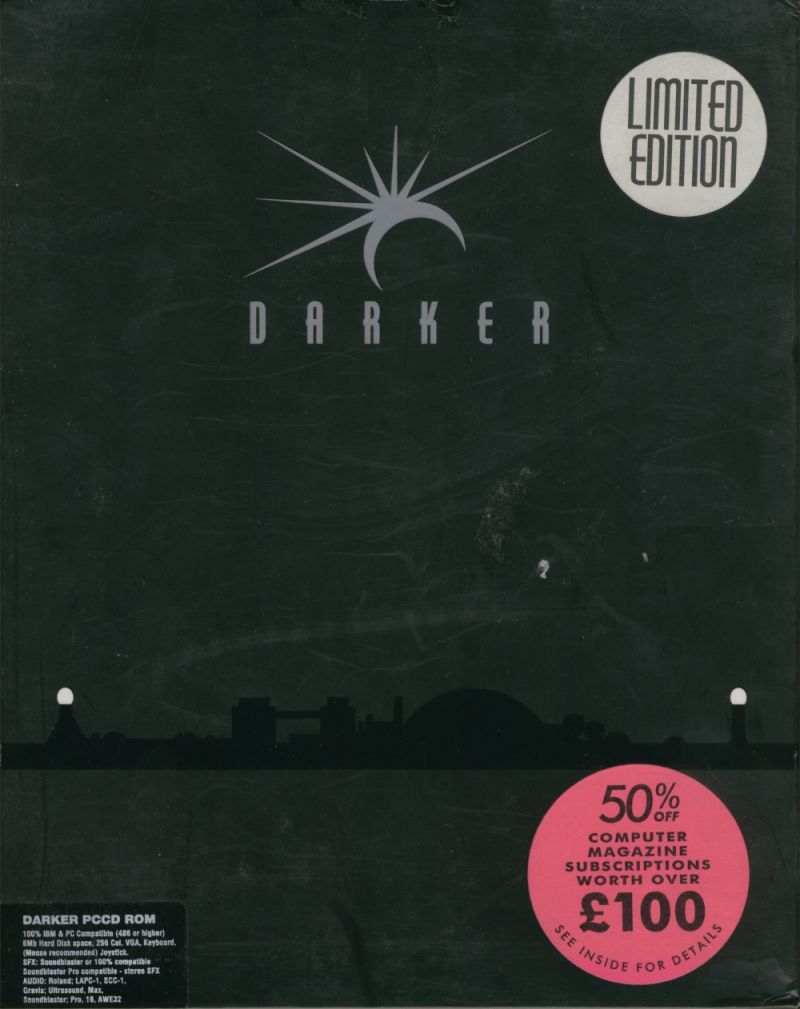 Want to play your all-time favorite Darker online, which was released by Psygnosis Limited in the year 1995? Click here to play.

It seems that in discussing long-term astrobiological discussions "is there life on the tidal-occupied planets?" will finally have the certainty at least through the game Darker, released in 1995. Yes, in this game you will be in such exotic surroundings. Let me remind you, the tide captured a planet is a celestial body that due to tidal braking from the parent star in a matter of hundreds of millions of years fully synchronized its rotation in its orbit with its axial rotation. That is, one side always day and the other half of the planet – the eternal night. This specific arena of action for that time (1995), in my opinion, has not yet been used in games.

You take on the role of a Tolly, the pilot of Delphi, located on the dark side. But, judging by the constant twilight and the beautiful glow of the eternal sunset, the city is still very near the terminator of the planet. That is to live modestly, but it is possible. Your opponents – some Halons have permanent "residence" on the illuminated side of the planet. For reasons of some global "difficulty" of an environmental nature, they were forced to start actively to carry their socio-cultural "value" in your hometown, and in fact aggressive to conquer and extend themselves living space for continued existence. Well, the story, familiar to tears: "Wrong, violent, militarized, and spiritually immature race displaces loving, humble, hardworking and the right race." In General, now all hope of you, the pilot...

The game is made explicitly novice Amateurs in the field of game development, but the graphics quality is still very good, especially for the time. Nice colour palette selected is characteristic of a country of eternal twilight, as well as the design instrument panel of the aircraft immediately riveted my attention to this game. The fact that Darker c someone's light hand is almost everywhere, marketed as a up galaxies, which, of course, is not true. Here you control the aircraft moving in the atmosphere and driven by a jet pulse. No stars in the sky and move in full 3D characteristic kosmosimov, not here. Rather, it is a game product should be classified as a simulator of a futuristic flying war machines. Your machine "Caero" initially equipped with rather primitive weapons, but gradually the scientists and engineers of the city "will try", and your power will increase with the passage of missions. Movement is only possible within a regular grid of some of the pylons through which wirelessly transmitted to your aircraft meager portions of energy, which is lacking in the city, living in the eternal twilight of the dark side of the planet. And simply put, is posts, much resembling our lights of evening lighting on the streets.

And missions in the game - caution, do not faint, as many as 115. Yeah, too much... And most of them will pass over your hometown in a rather monotonous rhythm: briefing, mission, flew, saw, destroyed, returned. A feeble could not stand and... threw the passage. The author of these lines, for example, "broke" somewhere between 20-m and 30-m levels. But the game promises to be the underground tunnels and will be the most pleasant mission on the light side of the planet in the final game, where you instruct the destruction of the industrial infrastructure of the hated aggressors – Halon. There you will fly several different model aircraft assets. In my opinion, it is the monotony of the gameplay gave the game to a well-deserved popularity.

The design of the city is pleasantly varied. Here there are shops, and a chapel with continuous ringing of bells, the Mall and even some industrial enterprises. You can fly within the electricity distribution network of pylons and only over the urban area. You should thoroughly memorize a map of the city and names of basic objects, as the job in the briefings already assume your knowledge of the native area on the 5 plus.

The game is somewhat similar to an analog low-budget picture novice Director in film. But it just does not spoil it in any way. All done quite efficiently, so to speak, improvised and, it seems, with the participation of the developers themselves in the "shooting". Theme music game unique, made solidly and to last. By the way, many of the "reviewers", it is not penetrating, described the game as a struggle of a race with the majestic name Dolphins (Dolphins) with a race of Halons, but in fact it turned out that the "Dolphins", actually are residents of the city of Delphi (Delphi) is the most common terrestrial anthropoids, dressed in the style fashion mid 90-ies of the XX-th century. Videobritish before some of the missions come from the young man, whose discreet wear frankly gives it a mediocre programmer-Earthling, but not representative of an alien race. The final video game just touches: everything is "homemade" frankly sticks in the frame, "the Amateurs" – well exactly, one of the creators of the game. And so, the guys are just great – they are all game managed to make themselves, and it must be said, very original and interesting creation. That's just to diversify the gameplay, they failed.

Darker – a vivid example of how a team of enthusiasts managed to create a computer game that later became a commercial product. The developer somehow claimed as Psygnosis, however, from the information in the games menu about the true developers (Credits) you can learn how called a team of talented igrodelov – A Day 1.

Enjoy playing Darker online, it can be played on your browser and is free.