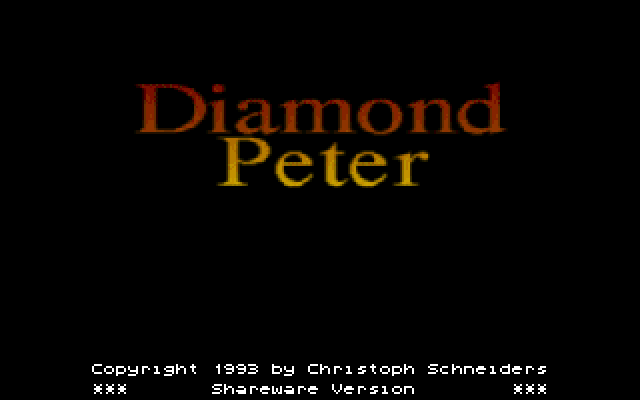 The famous developer Christoph Schneiders created Diamond Peter in the year 1993. It’s a perfect Action game and can be played online by clicking here.

Once the gaming industry has given masterpieces: Tetris, Digger, Lode Runner, Boulder Dash and a number of great projects that it is worthy of space in the chamber of weights and measures. And something great (or at least successful) are always trying to imitate the less talented developers in an effort to find projects for their place under the sun. So is this thing created in the depths of German game design. In fact it just copies the principles of the above Boulder Dash, but technically has its "distinctive features"; however, the latter is hardly true.

Enemies are allowed to kill, and not only the bombs — as in the original, can be tilted on them some rock. But this game provides more and "own" way of violence: enemies really drown, but only if you do not have time to escape from the stage until its complete immersion under water. The developers, by the way, have provided a presence under her, albeit short - lived- only about five seconds, so get out in this scenario will not succeed. Unique levels of Diamond Peter at least 30 out of 100, and each has some features: if one simply run to the exit at the other need, for example, to find the keys to the door. As for the rest, they are almost identical to each other, and sometimes it even seems that you just started the game again (same conditions, patterns to complete the levels — all the same). By the way, in the game, in addition to keys, there are other items which, however, are either not needed or have no obvious effect (e.g. jars). It is also worth noting the fairly high pace.

What was Boulder Dash? Fun arcade — it lacked the stars from the sky, but it is to this day a PLEASURE to play. Being a fairly simple game at its core, it is still a serious challenge, though the difficulty with each level increased. The first couple of levels fine to reveal all aspects of the game: the enemies (and they can get diamonds!), here are ways to kill them (to reset, for example, a stone), and here is the output (can also be closed, so you need to look for the key). Not dead? That level is more difficult. And thus the excitement, but the series is still alive, and she represented an immense number of game platforms. And most importantly, that it is still trying to emulate. What is Peter Diamond? The idea is too fun arcade, but the above mentioned conditions are not met (especially for the complexity of the game). There is nothing outstanding or that would be worth to pay attention to the usual clone of more popular games made without any real highlights. However, it is also rubbish to name any means impossible, just a strong middling.

Not sure how to pass your time, why not play our classic videogame Diamond Peter online? And the best part, it is for free!