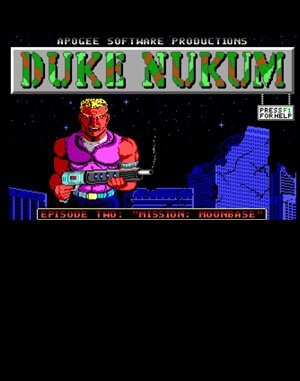 In the year 1997, the maniacal Dr. Proton has developed mechanical creatures known as Techbots. Commanding an army of Techbots, the insane scientist intends to conquer the entire world. There is only one hero on Earth who can stop him with his guns and attitude: Duke Nukum. Play Duke Nukum: Episode 2 – Mission: Moonbase online!

Based on the same game engine as Crystal Caves, Duke Nukum, Episode 2: Mission: Moonbase is a side-scrolling shooter with platform elements. Most of the gameplay consists of shooting enemies and exploring the environments, trying to reach the exit and advance to the next stage. Some of the environment is destructible: obstacles can be eliminated by shooting them. Defeated enemies yield points to the player. Duke can also collect power-ups to increase his health or upgrade his gun, as well as pick up inventory items with special abilities. At the end of most levels the player may receive bonus points, depends on his performance and achievements unlocked during gameplay (e.g. destroying all security cameras).

The game is the second episode of a trilogy; each episode was released separately and also as a complete game. In this episode, Duke follows Dr. Proton to his moonbase, after the evil scientist has escaped the hero’s wrath in the previous episode.