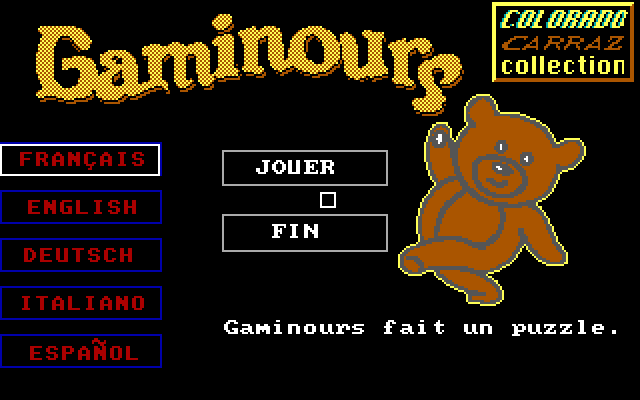 Click here to play Gaminours and the Puzzle online
5 /5

With many different features and various levels, Gaminours and the Puzzle released in 1989 hit the right chords right from the beginning. Play this excellent Puzzle game and online now.

Gaminours and the Puzzle description

Insignificant in its essence (to be honest), but curious in terms of rarity, the representative and at the same time the ancestor of a whole series of children's puzzles from the French company with not a very European name - Colorado Technologies, - consisting, according to some, only two people. Information about these things has not been preserved almost nothing, except for fragmentary references at the faded pages of an old specialized magazines, where, in particular, it was noted that they were created both for PC and for Amiga (the Amiga in the database of information about the series again, no). In General, this is another whole - though, of course, tiny - "cultural layer", until the spring of 2018, almost all (even at home) is forgotten, but now returning to the people.

Good or not, but about the most this game can say very little. Before us the most that neither is a classic version of "jigsaw puzzle", where the player is required to lay down the image (landscape, any object or vehicle, the bear is a kind of "mascot" of the series, and so on) from disparate fragments. The latter in particular puzzle can be from 6 to 16, and the total number available for collection pictures - 25. There are two levels of complexity: first there is a grid that follows the contours of specific fragments, for combining, which greatly facilitates the process; in the second it is, accordingly, absent. At any time, if required, by clicking on the question mark button at the bottom of the screen to see how the image is collected in "complete" form; there are also implicit audio cues, allowing the player to understand whether it is true his actions.

A time limit is missing. Complexity can be assessed as "basic" at the first level, and "minimum acceptable" (for a child of senior preschool age) the second. It is interesting that, formally, this thing supports five languages: French, English, German, Spanish and Italian; in fact the same text there is almost no (and, by the way, even not all available translated into not native to the creators of adverbs). The visual component of these things are traditionally not measured, but just in case, note that here, everything looks even without any "frills", but quite nice.

The verdict was in the beginning of the previous paragraph: here you do not expect absolutely nothing unusual. It standartnyi a set of "jigsaw", which, of course, never makes it "bad", and besides - a big rarity. Accordingly, we can recommend it either for small children or the faithful fans of it said entertainment or collectors.

Want to play Gaminours and the Puzzle online now, play it on your browser here.