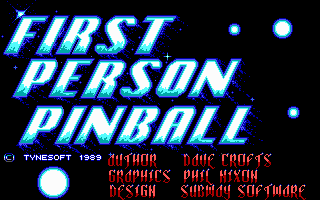 Do you want to relive your good old memories? Play 1st Person Pinball again, it’s a perfect DOS game launched in 1989 and a must-play for all video game lovers.

Perhaps the most unusual pinball of all that has ever been made - from the first (!!!) person. Although, of course, retained the ability to play in a familiar perspective from the top view, but to see "the way" pinball ball "eyes" of the ball in full 3D is just something. "Playground", although only one, but due to the uniqueness of the game more than enough.

The "traditional" mode to hone their skills and thorough study of the location of the places from which the ball is repelled, and other objects, in order then to play with the first person. The rest of the game is similar to other pinball – can be noted is that before the game, given a choice of three speeds and two levels of "repulsive forces" of the ball. Graphically, the game is in each of the two modes looks great – can't take that away. And she just recommended to all, particularly to those who consider all pimboli the same primitive, will be a great chance to disbelieve the correctness.

Tired of your same old routine, want to add some entertainment and fun element in hour life? Play one of the best videogame 1st Person Pinball online now and change your boring oold routine for good.