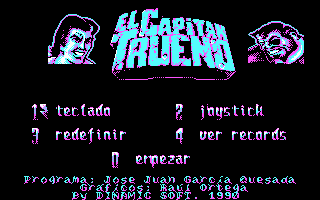 In the year 1990, El Capitan Trueno was launched by Dinamic Software, a top-notch Action game with an amazing and engaging Arcade gameplay. Click here to play it online.

El Capitan Trueno (eng. "Captain Thunder") – the hero of a popular Spanish comic book, which, unfortunately, never translated to any other languages. Brave Spanish soldiers lives in the XII century, during the "heyday" of the Reconquista, and is constantly fighting with the Moors and all sorts of monsters, defending his native Castile. Help him in this his faithful friends, the mighty Goliath and a dexterous and nimble jester Crispin.

The plot of this game is built on one of many such stories. Princess Sigrid, beloved captain who always gets into some alterations, kidnapped by his former friend Abbot Estanislao de Castiglione who sold his soul to the devil and turned into kozlovogo demon, having power over a variety of hellish creatures. And, of course, only the Captain with his companions can save the unfortunate girl.

This game is the gameplay is somewhat unusual – we're going to operate simultaneously three characters. The captain is more than just good in battle – he is armed with a sword, a shield, an excellent soldier. Goliath almost can't go – just jump in. But his jump can destroy the earth, or destroy the enemies, on which he jumps. Crispin also very weak in combat, but can continue and above all to throw a rope (a rope in the game is extremely important to climb a lot and often) or to sneak somewhere unnoticed.

Enemies abound here: different giant spiders, rats, soldiers, skeletons, demons, and many others. But what is interesting – "mysteries" still much more than fighting, so guess what it's still arcade or quest. At times, the game even slightly begins to resemble a series of Lost Vikings, so sometimes similar situation when it is necessary to use abilities of different characters.

The graphics are not quite so conventional, but still (especially for year of release) average objectively: for example, there is practically no backgrounds (or have been at a minimum). Drawing is not quite clear, but still understand that on the screen where it is possible.

Verdict – the game is unusual, deserves attention as lovers of the old arcade games, and fans of "light" adventure. But note: this is a Spanish game. It is in Spanish (and no other version does not and can not be, since even the comics about captain was not published in other languages) with Spanish keyboard layout. So that you can experience full immersion in the world of "non-American" games...