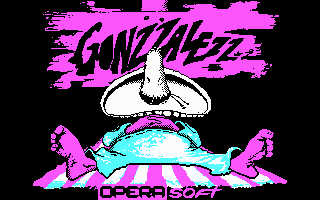 Do you think old video games are boring? Play Gonzzalezz, it is a Side view perspective game developed by Opera Soft S.A. and released on DOS in 1989. You will then know that you were wrong.

Rare Spanish platform arcade game about the Mexican Gonzalez whose name she called. The plot, as in most of the Spanish games of the time, more than unusual: lazy Gonzales fell asleep during Siesta (afternoon rest), and he now has a nightmare that his of the vacation deprived. Over two large levels he will need to find a way back to his hammock. Control of the game is unusual even in the light of its origin, so it is discussed below.

The first level "the beginning", it consists of seven locations. The effect here is as if it is really in a sort of nightmare: a flying platform and keys, vacuum cleaners, and hands without bodies as enemies (as well as much more about what to write here should not), and most importantly – a huge number of jumps that have to be made for the passage of this episode. Move left by pressing O, the right – button of P, the jumping is carried out by button Q.

The second level represents a more "traditional" arcade – there is a completely smooth landscape of the Mexican desert (the background consists of thickets of cacti). As the enemies here are Indians and various wild animals, which will have to fight. In the wilderness, scattered weapons and ammunition (end). In order to take something, you first need to bend for this object (clicking A button) to take or use a weapon – press the Space bar (Space).

I must admit that graphically, the game is made very nice, utterly atmospheric and psychedelic, that's why (also because of the great rarity) is highly recommended to fans of the genre to study.

P. S. of Course, the game is in Spanish, but the text, excluding the menu and the control instructions before each stage (which I gave above), it is not at all.

Enjoy playing Gonzzalezz online, it can be played on your browser and is free.