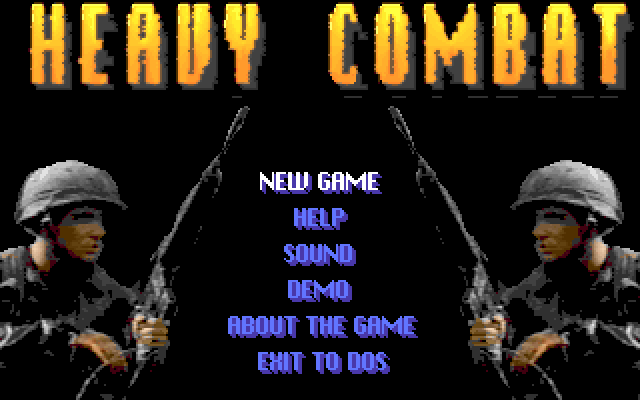 Game from the category "available artifact" - technically it seems to be available online, but does not know about her positive one. And no wonder: its origin is shrouded in mystery, not known to neither the developer nor the publisher (if he was). It is only known that the game came out in the shareware-version (however, the site presents full registered version). We also know the name of the graphic designer - Scott Kampung.

The genre of Heavy Combat - military action-arcade "static" type. We're playing a lone soldier in the trenches, depicted in the lower part of the screen. Hiding behind the parapet, his task is to eliminate enemy soldiers hiding in the opposite trenches and (or) appear on the battlefield. Sounds pretty simple, but in reality the game is diverse and complex.

Let's start with the fact that you have two types of weapons: machine gun and throwing knives, which can throw with both hands. Like bullets and knives is finite, so when they run out, will have a radio to call a helicopter to get rid of extra ammunition, the pilot will be so generous that will give you additional "life" (you start with three). Please note that to use the radio you have to stand (for some reason, the squat can't have it) and not have to hold in the other hand weapons. Because the version of complete (shareware always available only two weapons), may eventually have access to three types of weapons: hand grenades (ten killing enemies), rocket launcher (with 20 kills, grenade is much superior in strength and attack range, and can penetrate the parapet), Bazooka (30 murders, more powerful than a rocket launcher, blows, but does not break the parapet).

In Heavy Combat and there is such a thing as "sabotage". In shareware version there is only one of their kind - the challenge of enemy aircraft. Unlike you, your opponent can call on the radio a plane that will drop a bomb on you. Because use of radio opponents in this game, same as you should stand up, you should try to kill him to complete the message for help. If that did not happen, the plane will fly, but the radius of destruction have dropped their bombs not too big, so you can try to have time to run away from it, but to really make it difficult. The full version adds two more types of diversions: jeeps and bombers. A jeep appears on the field (usually outside) and suddenly "cuts" on the screen; its crew consists of a driver with which nothing can be done, and an arrow with a stationary machine gun in the back. With driver separately nothing can be done, but an arrow can kill from a machine gun or jerking the knife. Bazooka (but not flare) capable of aimed shot to destroy the jeep entirely. Furthermore, you can just hide behind the parapet and wait for the jeep to pass, but to get it you theoretically can. Suicide bombers are the same - very dangerous guys, hung with dynamite. Kill them for some reason, nothing and nothing (!), - if such suddenly appears beside you, the only way to escape remains operational otbivanie at a safe distance.

Graphic solution selected is atypical: the background is a photo of some muddy field on the upper sides of which are placed as if deliberately crudely drawn enemy soldiers (in gray, above) and your (green at the bottom, visible only from the back), perched behind their parapets. However, despite the visual simplicity, there is not only the effects of explosions (from the Bazooka, it should be noted, very colorful), but also emotions: the expression of the enemy with your mouth open. when you get into it, you just need to see... By the way, the effect of blood in the game is too, so maybe very young children, it will not work.

The verdict - the real thing. Its actual valuable (despite availability) rarity, addictiveness, visual design. Very addictive, I must say, and it may be suitable as evening entertainment is average difficulty.