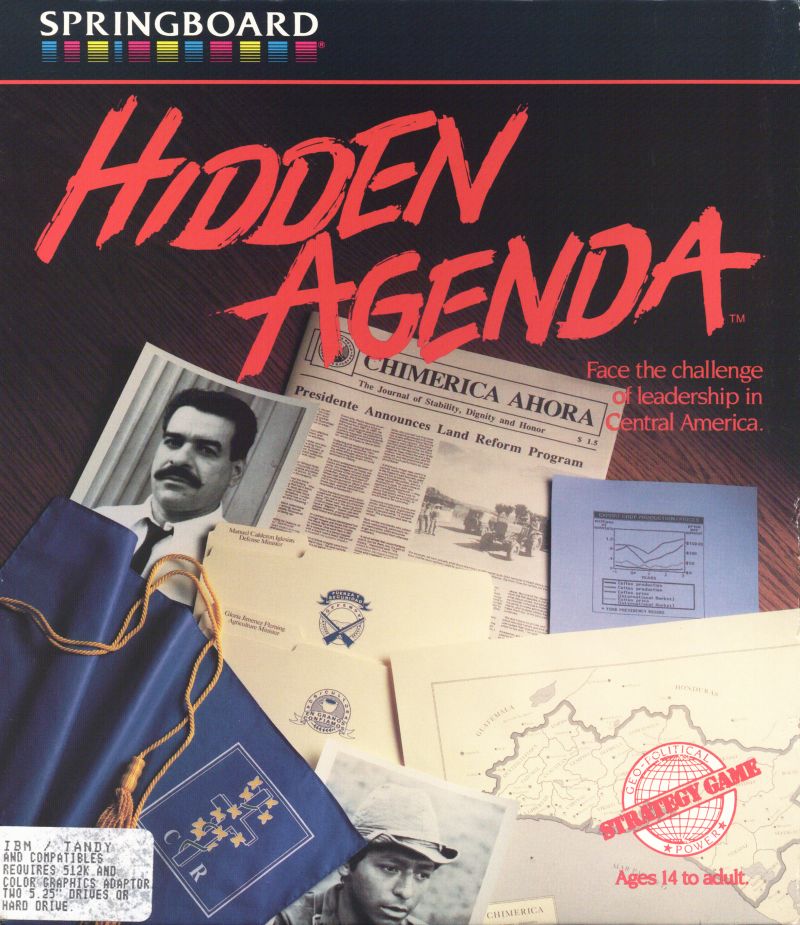 Hidden Agenda was launched by Springboard Software Inc. in the year 1989 which was loved by all old and young. It’s an interesting DOS game and can be played online by clicking here.

The tropical sun warmed the earth. Large drops remaining on the branches of a giant tree after the recent rain and now slowly running down. A brown monkey, to the last minute, steadily bobbing on the branches, complementing the observation of this pattern of modest meals in the form of an unknown fruit, and now suddenly sprashivala because she are distinguishable sound of a tropical predator. A few kilometers from the seemingly untouched nature – beautiful white town on the low hills on three sides by the sea. Narrow dirty streets, and only one building in the city centre, which has all the utilities. Dark-skinned children of African descent, who had never seen clothes, toys which replace the pieces of rubble from the dilapidated pavement. Black woman selling ripe fruit, juicy fruit and Boyko inviting buyers. Short column of green trucks, a fierce signals, dispersing onlookers, covered the body of which the complete purchased bread instead of weapons to fight the rebels; the drivers still don't know what their heads already under the gun, those for the destruction of which is the load, and that in a second from the former "lazy" tranquility in the city will not be over... this Is the world of a small country of Latin America – Chimerica.

Of course, this country never had any. But after two hours spent in this game, its existence is beginning to believe. After all, you play the role of a resident just that the only "decent" home in the heart of the city, a sunburned man in an unchanged shirt and military cap, which under a reliable (hopefully) guard in his cozy office filled with cigar smoke, holds the fate of his small country. The President? Not at all. The President, and if quite frankly all – powerful dictator.

Hidden Agenda is a "tactical political strategy-simulator". Officially. It is actually much more complicated. This, if anything, the most detailed "simulation of a dictator," I know. Acting as the newly elected quite democratically President, you have four years (if you're lucky – and for a much longer time, and if not – then much smaller) to take over the management of Chimerical and taking certain decisions concerning almost all possible aspects of society, to lead their country to prosperity or death.

Four years. Only four, and that's only the case if you are not overthrown. Then – re-election. Because it is only we and our entourage know the truth. And so the last coup took place under the (false) slogan of "democracy" and "fair elections". Therefore, the statistics of the Board will be issued at the end of each (a nice term) of four years, even if we will "re-elected" for another term or those (sometimes "other") way.

The background story is nothing joyful for us not reported: the former dictator in the end weakened his sprees (for which he paid with his life), but the economy is almost destroyed, the cursed gringo all the time somewhere near, various political factions feuding with each other (well at least until the verbal way), and somewhere in the jungle hideouts of the rebels. And to help you in all of this horror – only four people: your immediate office of the Ministers: the Ministers of foreign Affairs, internal Affairs, agriculture (read: the economy and Finance) and defence. However, still there are generals...

Ministers can be only four, but each of them is representative of any political party, which in our country only three (Christian, "people" and conservative). Thus, no matter how "cunning" or was our choice to "balance" between the interests of the factions, one party would effectively be ruling. It is important not only to "guess" which party is now the most strong and rate which one is more all you like, but be sure (especially in the appointment of the Minister of defence) to consider the opinion of generals.

Their submission to you largely formally, the dependence on the army is very strong. Of course, not all of them are traitors (most of it is normal and even correct you), but be prepared for the fact that often they will "advise" you to roll these or other reforms, if you want to introduce some kind of "freedom" for the people. Each General (and Minister) can dismiss, however, such a move is fraught with many consequences, in particular the civil war with soldiers loyal "dismissed" the General.

The gameplay for each "four years in office" consists of decision-making (as an independent, and on the advice of the Cabinet), concerning agriculture, counter-insurgency, improve one way or another the welfare of the people, by the conclusion of trade agreements for export and import of certain goods with foreign powers, begging money from the IMF and so on. Here we should immediately say that the game itself is a set of successive screens about the features which we will discuss below.

It is important to note this game as a "personal meeting," after all, you as President have to give an audience to those or other people. It is clear that most often it will be your own generals or foreign diplomats, but sometimes it happens that you want to meet some "simple" people – for example, doctor, teacher, public figure or just a poor girl, whose father was unjustly thrown into jail. Each such dialogue should lead to the adoption of any decision on your part to either help/agree with something or to refuse. It should be noted that sometimes these "meetings" have a very large impact on your future Board, sometimes raised in such "conversations" topics forced to call emergency meeting of the Cabinet, to consult what they have heard "word of mouth".

Regarding "meetings", by the way, it should immediately be noted that, firstly, your colleagues, belong to different political forces can (and will) try by you somehow "bending" the line, and secondly- sometimes some of them can be a traitor and purposely to advise you of anything bad, especially for emergencies (which always will, no matter how good you played, the same rebellion, for example), when actually your fate as a ruler. Salvation is here – only your sanity, and frequent (very frequent – this is important!) an appeal to impartial statistics: the game is good because any time you can use a variety of graphs and tables to get a more comprehensive information about the state of Affairs in the country on all indicators.

To play in Hidden Agenda, you can actually infinite number of times, and the reason is not only significant "varianttest" in decision-making on various issues, but "the generation of random events", which is very high. In one passage or another event may happen; the other may not happen, even if you play the same way. Although a causal relationship of the events is still very high, and who, with the same style of game will be your worst enemy, while the other may be the most devoted ally – not here to please everyone, but there's no one here with whom it would be impossible to agree in principle.

About the graphics and interface, not to mention here in any case impossible. The latter one is not that intuitive, but still objectively easier than in many other strategies, and when you get used to it, it becomes almost native. But the graphics... Perhaps, once again, we face a rare example of a game with truly unique graphics, and so successful that it is impossible to imagine it other.

As already mentioned, the whole Hidden Agenda is a set of successive screens. Many of them are graphic, but ALL of them, whatever they depict, made in black-and-white palette. Just two colors – and with the amazing quality of the picture, draw the details of each image, whether a portrait of your partner or the view from the window of the personal account. Every event, whether it be a visit for foreign journalists for interviews with you, a meeting of workers or the rebel attack, also appears to us in the form of beautifully animated black-and-white pictures.

Sound and music in the game. At all. And should not be – silence and black-and-white graphics coupled with some features of the interface excellent way to create a need, "the very" atmosphere, atmosphere only "pacified", but not "pacified" country, where every day, or rather every second, anything can happen.

Your system alerts include phone calls and delivery of correspondence, is often a feature generally in the form of text screens, slightly diluted stingy graphics in the form of postal envelope, telephone or newspaper pages (and sometimes even without it), but with what excitement always nervous when it comes to regular reporting of information, especially when we directly write that the phone is ringing, and the wire – loyal General, whose voice thrilled... But if the screen suddenly appeared a white star with a terrible inscription of "immediate attention", that guessing is not necessary – this means that something happened such that now may decide our destiny... And that is because external visualization is not so great, it begins to seem that you do in a stuffy, smelling of tobacco smoke in a locked room, counting the last seconds until, when the brown door will collapse under the onslaught of an angry mob... "presence Effect" exceeds 100%.

What is the result? Games on Latin America, and especially the political situation in her "small" countries, really never was, except for a wonderful but too "cute" and cartoon-like Tropico. Hidden Agenda also provides you with a unique chance to be in the chair is real (virtually) dictator of those sultry lands and showing stunning for a computer game range of aspects of society, to feel for yourself how difficult is the burden of power over the "banana Republic". Amazing gift for the true strategists and deserved the highest rating.

Relive your old memories by playing Hidden Agenda free and online on your browser now.