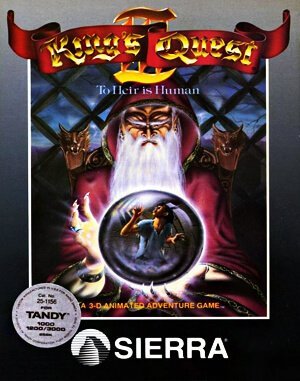 Click here to play King’s Quest III: To Heir Is Human online
5.0 /5
King's Quest III was markedly more difficult than its two predecessors. The player was required to type in magic spells line-by-line from a spell book that came with the game. The spells partially served as a form of copy protection, although the game already had a disk-based protection (it ran on a self-booter required disks to play, and could not be copied easily).

King Graham and Queen Valanice had two children, Alexander and Rosella, and the kingdom was once peaceful. It wasn’t long until Alexander was snatched from his crib and things started to take a turn for the worse. A three-headed dragon threatens the ever-peaceful Daventry, and requires a maiden to be sacrificed every year. Rosella is the chosen one.

Meanwhile, in a secluded house atop a mountain in the land of Llewdor, the evil wizard called Manannan keeps a young lad named Gwydion as his slave, forcing him to do menial tasks as he prepares his spells and observes the country through his telescope. Gwydion must find a way to outsmart the wizard, escape, and eventually discover the truth about his own identity.

King’s Quest III: To Heir is Human is an adventure game similar in basic gameplay mechanics to its predecessor The player navigates Gwydion with arrow keys and interacts with the environment by typing verb and noun combination commands. Llewdor consists of interconnected screens that loop once the player character reaches the border of the land. Throughout the course of the game, Gwydion will also travel to other locations and have a magic map at his disposal, allowing him to teleport to different areas.

There are more items to collect in this installment, and more complex actions required to execute, raising the difficulty level. A large part of the game proceeds in real time, with Mannanan following his own schedule, forcing the player to plan and time his actions. There is also a time limit imposed on the game’s first major quest.

You can play King’s Quest III: To Heir Is Human online here, in web browser for free!