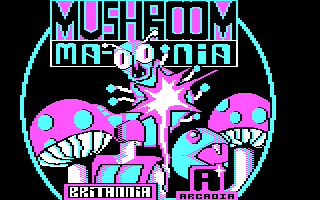 With many different features and various levels, Mushroom Mania released in 1987 hit the right chords right from the beginning. Play this excellent Action game and online now.

The next version of the Centipede game, not too different from the original.

Our task is to manage the semblance of a moving laser cannons at the bottom of the screen that must shoot moving her on top of the centipede (see Centipede description). Unlike the original, just a lot of mushrooms on the field that impede the successful firing (but for the destruction of which will receive extra points). After the murder of one of the millipedes immediately there is a new. The higher the score on points, the higher the speed of the game. There is also a much faster spiders, which can kill, and unique unkillable enemy "Hungry Pakerson" (his presence in the game is frustrating).

Conditional graphics to the limit, which in this case is perfectly fine (by the way, the mushrooms themselves are drawn quite clearly, as well as spiders). The very same game can be recommended or the most ardent fans of Centipede and any of its variants, or just those who want to rest for a few tens of minutes from a hard day (because usually this game is fun to play in a row that's the number).

Tired of your same old routine, want to add some entertainment and fun element in hour life? Play one of the best videogame Mushroom Mania online now and change your boring oold routine for good.