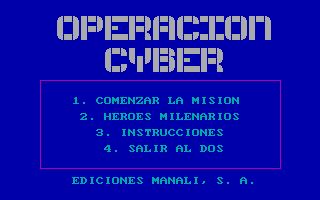 There are some video games which you will never forget. Operation Cyber is one of them. It was launched in 1989, by Ediciones Manali, S.A. but still loved by many. Play it online now.

Rare Spanish action-Packed arcade, until recently, not only unavailable, but completely unknown to almost all over the world.

Developed plot no: we only know that the action takes place in the future, and try to be a hero-rebel – person who fights with monsters and robots. His goal is to find and destroy a main computer that controls all these creatures.

The game has a side of only three levels (called "sectors"), but each – a very extensive and filled with lots of terrestrial and flying enemies of various types. At the end of the game the hero will have to fight a boss – a giant cyborg.

Despite the fact that the game is made in Spain (and only the text that is in it, - menu, - in Spanish), its management is largely identical games to the English-speaking world: for example, moving a character forward and backward using the arrow keys and not O and P. Our hero can not only run, but jump and Crouch, which is extremely important, because many enemies can be defeated (and sometimes avoid) only in the situation of a jump or squat.

Most of the enemies in the game kill the hero at the slightest touch. These enemies are presented as "futuristic" robots, for example – some flying "tadpoles", and the very real monsters – like bipedal snakes, with whom you will encounter at the very beginning of the game. Bonuses there are and even quite common, but are not on the ground, and literally fall from the sky. There are several "lives", also there's a time limit (but quite gentle) in the passing game.

The graphics are pretty nice, although, of course, a special variety of colors can not boast, and backgrounds may be attractive, but dark and stingy with any details. But the figures of the hero and his enemies are drawn very clearly that this game is more important. That really pleases – so this is a really challenging gameplay and almost non-stop action in the best traditions of "combat begalok" the turn of the 80s-90s years. If we add to this tremendous collector's value of this rarity we get another old game, download which is recommended to all without exception.