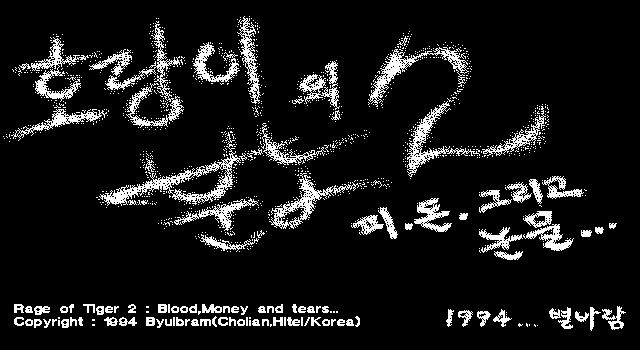 With many different features and various levels, Rage of Tiger 2: Blood, Money and Tears released in 1994 hit the right chords right from the beginning. Play this excellent Action game and online now.

The second game, if I may say so, indie Studio Byulbram Creature (at the time). First - Soul-ui Bunno - as of October 2018 not found.

The plot itself is not, and the action, in fact, boils down to opposing groups of fighters in the tournament for the championship.

Altogether there are nine characters, of which you can only choose three, and the rest is unlocked after completing story mode. Direct gameplay has some peculiarities: for example, there are six fixed types of attacks which need to be made on time according to the situation. This approach is somewhat reminiscent of the Virtua Fighter series. Among other features it is possible to mark the option to play together.

Graphics on the monochrome, and in General it can be described as stylish. The music is missing.

Conclusion: an interesting historical artifact that may be of interest to fans of the genre.