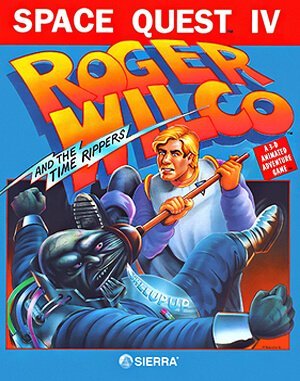 Click here to play Space Quest IV: Roger Wilco and the Time Rippers online
5.0 /5
In this installment, Roger embarks on a time-travel adventure through Space Quest games both past and future. An infomorph of reborn Sludge Vohaul from Space Quest XII: Vohaul's Revenge II chases Roger through time in an attempt to finally kill him. Roger also visits Space Quest X: Latex Babes of Estros (whose title is a parody of Infocom's game Leather Goddesses of Phobos) and Space Quest I; in the latter, the graphics and music revert to the style of the original game and Roger is threatened by a group of monochromatic bikers who consider Roger's 256 colors pretentious. None of the gameplay takes place in Space Quest IV. In fact, the "actual" Space Quest IV is only seen briefly in the introduction.

Following his humorous adventures in previous game, Roger Wilco is relaxing at his favorite pub somewhere in time and space when heavily armed soldiers enter the room. Carrying a parting message from Roger’s old nemesis, Sludge Vohaul, they plan to get rid of the janitorial hero, execution style. That is, until a man with an over-sized hair dryer helps Roger escape through a time rip into the future. Now Roger Wilco has woken up on his home planet, some time in a meta-fictional Space Quest XII. It is a grim, dystopian future: the series has gone to ruin without its hero, and Vohaul rules supreme. Roger must find a way to avoid Vohaul’s henchmen, fulfill his destiny, and learn about a few surprises that await him in his own future.

Space Quest IV is the first in the Space Quest series to feature Sierra’s icon-based SCI interface and 256-color graphics. The command set includes icons for walking, looking, using or taking, talking, smelling, tasting, as well as inventory access. Roger Wilco is shown on the screen from the exterior in multiple viewpoints. Like in the previous games, inventory-based puzzle-solving co-exists with timed tasks and various hazards that will kill Roger if the player is not careful.

You can play Space Quest IV: Roger Wilco and the Time Rippers online here, in web browser for free!

Secret of the Silver Blades