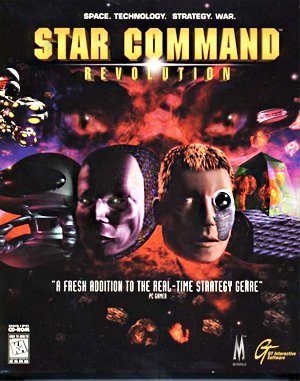 Real-time strategy in space. Play as one of four different races. Do the normal RTS thing; collect resources, build up a powerful military, and crush everyone else. Play Star Command: Revolution online!

Star Command Revolution is a fun and highly underrated real-time strategy game with some interesting ideas, most notably the addition of shoot ’em up gameplay into the strategy mix.

Star Command Revolution has two modes of play. In standalone battles, players each control a force and scrap to the death, with a mix of up to three other computer or human opponents. In these battles players can choose their starting race and are plopped down into one of 10 battle maps, either of their own choosing or randomly supplied. The AI has 3 ability levels, the best of which is certainly quite competent. These battles have limited resources, so games tend to be over quite quickly – I’ve had games range from 5 to 30 minutes, beyond that I would guess is quite rare. So it’s no problem that you can’t save multiplayer games.

In campaign mode one (or two) players travel between sectors in a quest to destroy four dreadnaughts and the evil Warlord Narvek. The multiplayer campaign means two players can team up to fight the bad guys, which is an interesting idea. They do, however, have to argue over who grabs which resources. The campaign is fought over some 30-40 maps which you can visit non-linearly – each sector has green hyperspace exits and these take you from your current sector to a new one, where you can view the galaxy map to check your progress. Completing a sector gives you a new ability, like level 4 Nomad ships, disabled enemy gun platforms, or larger material deposits. Defeating a dreadnaught has extra benefits, allowing your mothership to regenerate damage.

While there are 64 different ship and “building” types present in [the game], only a handful are available to you at the start of a battle or campaign. The startup ships available are your mothership (which builds new buildings as well as harvesting), a space station (which builds new ships if you have the materials), a research building and a scout ship. To learn new ship and building types you need to leave your mothership adjacent to the research building, but while you’re doing this you can’t harvest resources unless they’re very nearby as the mothership’s cute little gathering droid only has a short range. Success is down to using good combinations of ships.