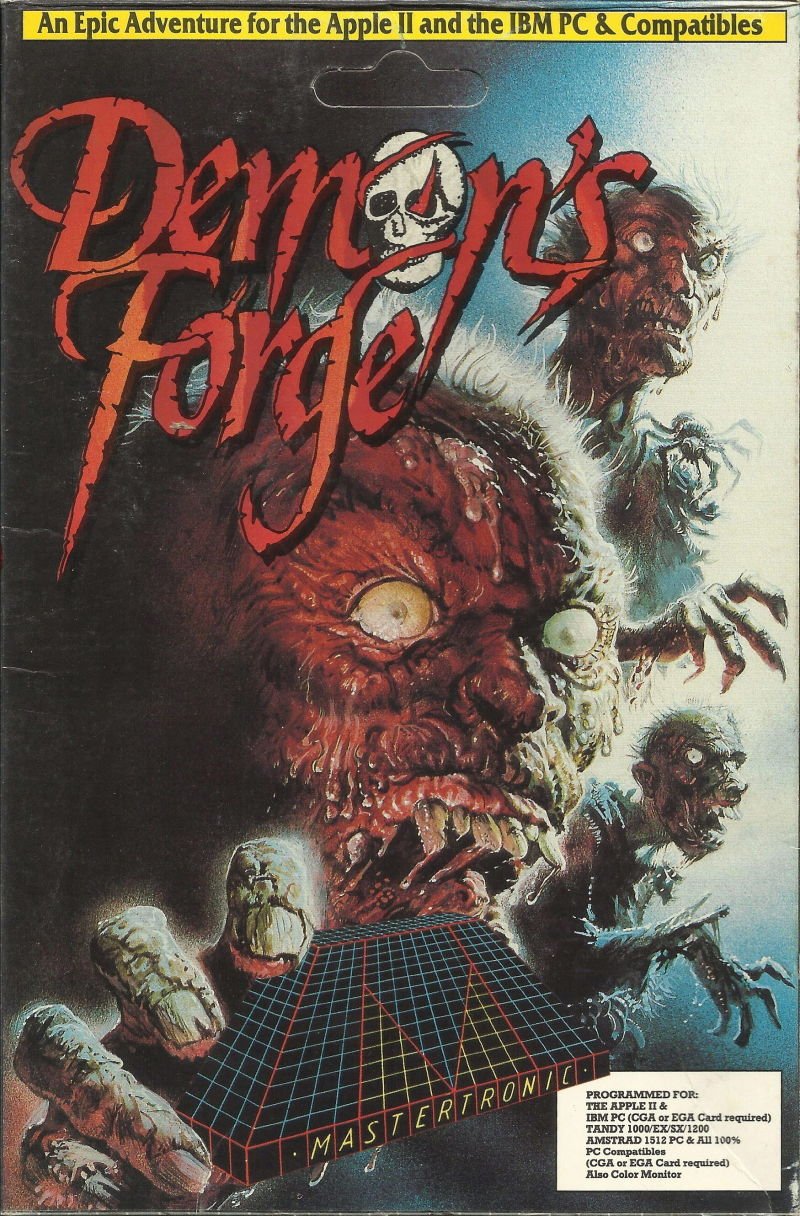 The Demon's Forge, a DOS game was released by the very talented group Randy Walsh, Troy Worrell, Brian Fargo in 1987. Little did they know that they will end up making history. Play this game again here.

The original version of The Demon's Forge was released in 1981 on Apple II and IBM family came format PC Booter-floppy much later, six years later. What made the Mastertronic re-release a fairly typical text adventure with pictures, after such a long time? It is not known, but let's look at the fact that offers us the game.

So, our character is a fantasy analogue of the modern media personalities to resign: once a famous Gladiator, now he spends time drinking in taverns, regularly getting involved in a fight. During one of the fights he killed several arrived to restore order, the Royal guards, for which he was sentenced to imprisonment in the “Forge demon” - a horrible labyrinth, where they put the worst of criminals and people whom the Royal person wants to see. And since no one has ever been able to go out or escape, then this place cannot be classified even as a prison, it's for those who are destined now to become a food and entertainment for evil. But to accept this fate, we will not - we do not need it. Using a very simple parser that knows how to accept arrow keys as direction, get yourself any kind of equipment and weapons, get acquainted with other cultural, let us knows why pursuing the killer, tame the spirit of fire... well, threw into the midst of crazy adventures.

Most of the screen is a window with graphics rendering for us the environment in the most that neither is the old school manner in EGA or CGA palette. Yes, at that time, was already released similar games with more detailed pictures, and even share animations, this is not to say that Demon's Forge graphics done poorly. All the available interaction objects are visible and duplicated in a block of text. As for the gameplay, found the puzzles logical, however some items require memorization, so you need to carefully read the texts - they may contain clues to the episodes that will be far ahead.

How about playing on The Demon's Forge to say, perhaps, nothing more. But how about the exhibit - is. Take a look at a trio of creators: if the name Troy Worrell few people say something, although he made a significant contribution to the creation of well-known games such as Battle Chess, Bard's Tale and Wasteland, the Brian Fargo, founder of Interplay, is a legendary person to transfer his services would be superfluous. But The Demon's Forge is their first creation, for which it deserves attention.

P. S. In 2011, thirty years later (just think!) after the release of The Demon's Forge, led by Fargo's company inXile Entertainment has released a mediocre slasher Hunted: The Demon's Forge, which, despite the completely different genre and in no way associated with the game 1981 the story has a lot of references to it. Among them, the second part of the name, the presence of very long tunnels with valuable finds in the end (The Demon's Forge at the end of such a tunnel is a man who is interested in the player, not if he's ever read recently some good books), and some models of extras very reminiscent of the “thin man”, one of the characters in the text of the quest.

Relive your old memories by playing The Demon’s Forge free and online on your browser now.