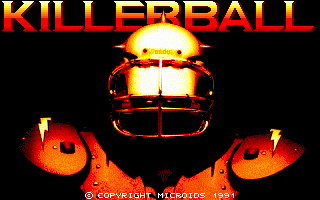 The very talented group, Microïds developed a Action game in 1991 and interestingly called it Killerball. The game is so engaging that you will feel that “time flies”.

A futuristic sports game, largely arcade, which action happens in a distant and dismal kiberpank future, where the government arranges for starving people the bloody entertainment to distract from pressing problems. Favorite "pastime" is "killerball" - a mixture of several sports where the rest of the match live is not all its participants.

If you played Riot, which actually is a more recent version of this game, almost nothing you will not be here. Killerby as the game is a mixture of American football, roller skates and the pinball game. The game takes place in a circular arena, where two teams trying to take hold of an iron ball that you want to throw in is located on the wall of the hole, "owned" team of rivals, and to prevent them from doing the same. No other rules (in the literal sense of the word) here.

Each team player has a health indicator, are available for viewing at any time. Killerby fully justifies its name – it really is utterly cruel and even brutal bloody game to take in which is not as a big ball, the opponent is very difficult and can be done in General, only ever knocking him off his feet, or killing. And murders and all injuries in the game is not only not prohibited, but strongly supported by the hooting crowd of spectators. Used against enemies of the techniques are quite diverse, the most terrible is to grab the opponent, lift it over her head and with all his strength to throw the ground (however, the excessive naturalization of violence in the game). Each match has a time limit, who more times threw the ball in the hole and won. But a meeting can be ended prematurely if all players of the opposing team dead or unconscious, and at least one goal is scored.

There are three of the League (in fact, the difficulty levels, because the dynamics, the tempo and the nature of the game there are very different, including the speed and brutality). There are also different game modes: practice, single match and the championship in which eight teams compete (you can only play one of them).

Graphically, the game looks great – first and foremost due to the huge number of animations: animated almost all the major events (out of the teams scoring each goal, close-up, joyful embrace of the exhausted players after a victory and so on). Multiplayer on one computer is supported. Verdict – not the best game on this topic, of course, but overall – entertaining, interesting, challenging and quite able to captivate lovers of this kind of entertainment.

Play your favorite childhood game Killerball online in your browser for free here.