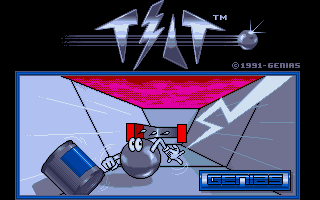 Developed by Genias in 1992, Tilt is a perfect Action game which ruled the arcade for several years. You can now play it online here.

Raritetnye hybrid of arcade and puzzle, returning to a wide audience of players. In this game we have to control grey living ball (eyes at least he was available and the name, too - Bally), but the story itself is, apparently, no (even good).

The game – at first glance, and in General terms is very simple: in the limited time we need to hold the ball from beginning to end, in order to move on to the next, collecting bonuses and overcoming a considerable number of obstacles. Games like this, there is quite a lot, and neither one of them can be called very simple, but Tilt! still stands out from the crowd with its complexity.

The game is fully top. At the beginning level the ball is in the upper left corner of the screen, the output level – in the lower right. By themselves, the levels are very large and are available for viewing at once, but on the device they represent a very real maze; and a time limit here, I must say, quite hard. To control the movement of the ball is not very easy: the fact that, like, say, a pinball machine (although this game never pinball), it cannot be stopped and only way to control the direction of its movement; with all this, by itself, the labyrinth is not at rest! In addition – and this is important to pay attention - to pass the level, you will need to press the red buttons in order to move forward. That is, the management here for such a game is not the usual, but still time to pass the level is limited, so the game is a complex, and at some point it will become very difficult.

Bonuses scattered around the level is completely randomized; apparently, nothing but extra points, they do not. The number of points depends on how quickly we managed to beat the level (if not met in the allotted time – we lose). However, there is a very useful form of bonuses – extra lives, which look like colored cans and scattered around the perimeter of the level.

However, in the maze we were waiting for not only UPS but all kinds of traps and related facilities, and it is here, it seems, vengeance, developers gave vent to their imagination. Among the traps is as "safe" in a collision with which the ball is either rolled back, or happens to him or something (not too nice, but not critical), and "deadly". And one wrong move can lead to a meeting with one of these, and even if the result of the collision is not death, that precious time will still be lost, and the timer is because ticking...

Safe traps are magnets are"horseshoe" and some sticky pools that slow down the ball, the characters "STOP", when confronted with that he rolled back, and – attention! – pitchers of beer (!!!), which in the literal sense of the word intoxicate our Bally – it becomes extremely difficult to manage. Deadly traps – this creepy door (rolled back the ball, he is not there), special electrified squares (get up on it – just death) and holes into which the ball may fall. The last trap, however, is not fatal as such: after falling into the hole the ball rolls out of any other hole on the level, and at this point may either perish or gain an extra life (!), - as lucky.

There are several levels of difficulty (although even on the easy to play not so easy), have the opportunity to play together on one computer and the game is built together very interesting: one player controls the ball and the other is "rotate" the surface of the maze. Also has a built-in editor to create your levels (to true of "maniacs"). Graphics for games of this genre to rate makes no sense – it is simple but timeless, and in this particular case, the colored and bright. Verdict – just a great puzzle, although, of course, very difficult, requiring thoughtful study and serious relationship. Of course, one could complain that the game returns to the people only now, but better not to do it and be glad that this wonderful event happened, so now to play it's a miracle nothing can stop it.

Enjoy playing Tilt online, it can be played on your browser and is free.