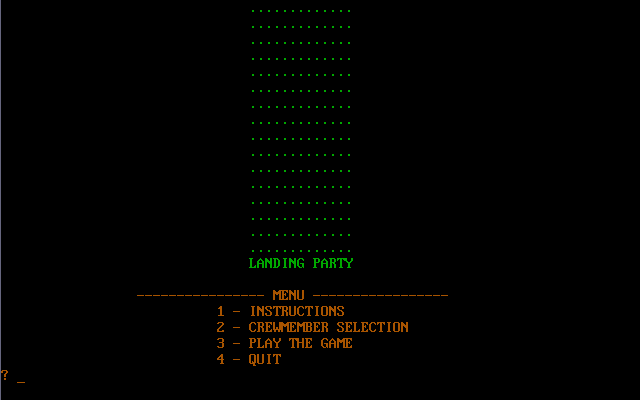 Play online, the famous Landing Party, a Strategy/Tactics game, published by Rick Pitel in the year 1989.

Very fleeting, but very funny and exceptionally attractive text is a science fiction game that was published as a Supplement to the journal Shareware Magazine.

According to the story, the player is the captain of the ship because of damage to the crystal energy began to fail life-support systems. In order to get a new crystal, you must land on the nearest habitable planet, which is under their production. For this expedition the captain selects five members of the crew (names you can give them your own), and with them goes in search of.

After a successful landing it is necessary to reach the villages of the miners, a 15 conventional units of distance. It is known that the crystal will cost you 100 credits in total the original financial balance is equal to 300. As soon as we make the first move, with maybe one of the many possible events, determined randomly. As a rule, in each step we meet different kind of enemies, but at times it could be someone non-aggressive, and sometimes can be detected, and trading posts or other local attractions. In any case, a choice of four actions: to fire, to throw hand-to-hand, to negotiate and to retire. Under either option, in addition to the retreat, the team is one step toward this goal, but, depending on the circumstances of a particular meeting, someone can be injured or even killed, and the money can disappear in many different images, e.g. to leave a bribe for the passage of the huge eight-armed monster. But in order to successfully complete the adventure, you need to by the time we get to the place of purchase of the crystal, the team has not lost completely and still have the cash to buy.

Each passage takes no more than five minutes, however, hardly stop at only one. The variability allows you to return to the game at least several times. This is partly due to the fact that the team members have parameters that are hidden from the player – only visible indicators of the stock of lives in percent. But in some meetings, you can buy new weapons, and companions can happen in different pleasant or not of chance – for example, someone may go into battle frenzy and to kill all opponents or, conversely, to shoot his own friend.

In the end we have an interesting, but very dependent on the randomness (that can be perceived in two ways) the game is on the brink of a strategy and, so to speak, step-by-step action. This occurs rarely, and therefore recommended all curious.

Tired of your same old routine, want to add some entertainment and fun element in hour life? Play one of the best videogame Landing Party online now and change your boring oold routine for good.

Jack in the Dark