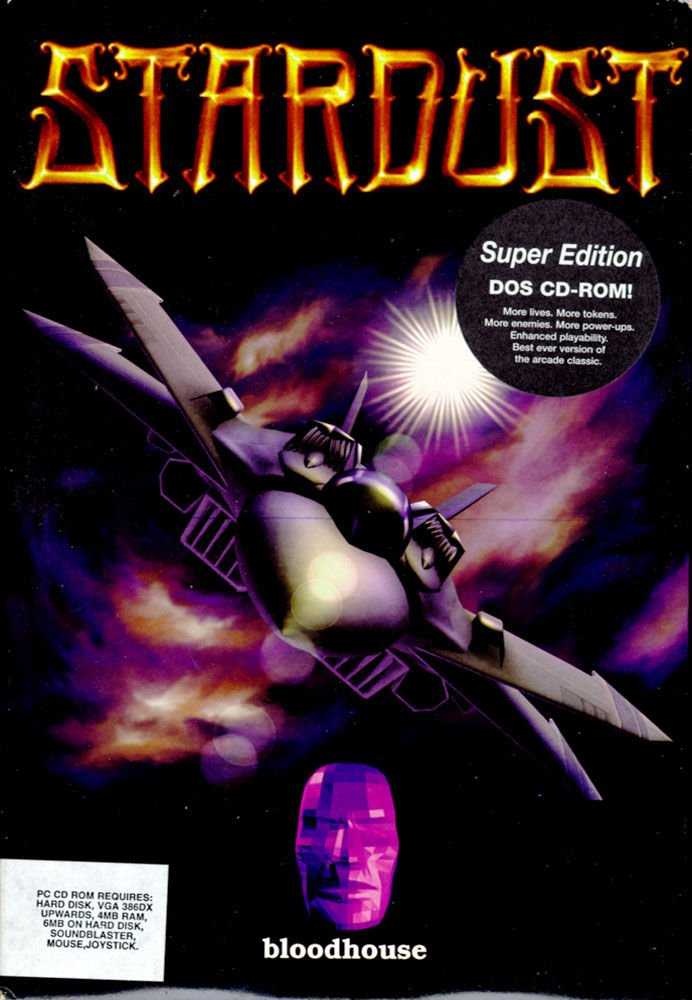 Bloodhouse Ltd. released a DOS game named Stardust in the year 1995. If you are interested in playing this Shooter online, then click here.

Stardust is the first part of a long-lived (in 2008 came out, for example, the version for PSP) series asteroid arcade from Finnish Housemarque. The gameplay is virtually no different from the version in ' 96, Super Stardust, the differences are only cosmetic, so a later version can be considered just a remake.

In the game you are given a small boat and able to control it with steering and engine at the rear. The brakes in this means of destroying asteroids is not provided, so you will have to turn engine in the direction of motion to slow down. The screen itself is fixated, that is falling on the left or top edge, ship or other space object is on the right or bottom, respectively.

You have to clean 6 screens on each level from asteroids, but at the end of the level to fight a boss. In this difficult matter help bonuses, departing from destroyed asteroids, and several types of weapons. Switching weapons is not so trivial, therefore, not be amiss here to say how to do it: clicking on Tab opens on the bottom status bar, where you can mouse over any weapon, then press Fire (space bar in the keyboard case) and to the right. If you press Fire and left, then the selected weapon will collect power up s, then how to use you will be the previous weapon.

The game has very nice graphics, with hand-drawn kitty (unlike the version in ' 96). The music is also wonderful, although it is not CD Audio as the rest, and tracker.

Warp-the levels in which it is necessary to fly in a pseudo-tunnel and shoot the asteroid and not to fall under the mines, unfortunately, in this version, not even a bonus, but rather a continuous headache! I was not able to go with DOSBox - too fast the obstacle and a collision is instant death. In this respect, the sequel has become more friendly to the player: for example, unlike Stardust, do not have to replay the whole stage if you killed in the end.

In General, the game is extremely high quality, and out still ports say that Stardust is already a true classic. If you are confused by the complexity of warp-levels, I recommend the version of Super Stardust.

Want to play Stardust online now, play it on your browser here.