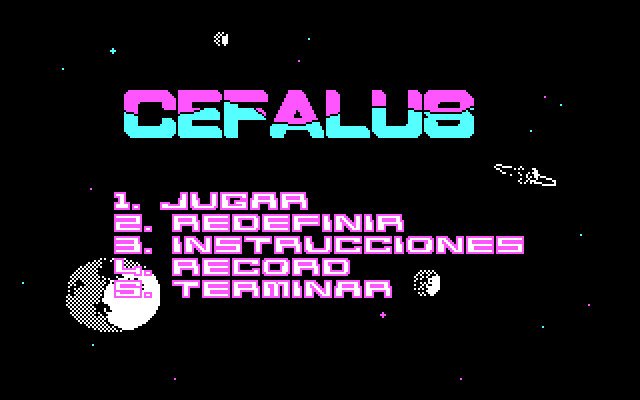 Want to play your all-time favorite Cefalus online, which was released by Ediciones Manali in the year 1990? Click here to play.

Raritetnye Spanish game in futuristic style and without a specific plot. We're playing some big-headed creature (smiling head on the legs) that destroys other creatures, moving around the screens.

One level consists of many screens, but no scroll, back to previous screens could not return. The hero has a few lives, have the opportunity to collect bonuses in the form of the letter E; any contact with the enemy instantly ends with the death. The enemies in the game very original: there are, say, ghosts, but there are some incredible "balls on the platforms." The murder is carried out by the shots from a distance, charges are not limited to, all killed with a single shot.

Each level is time limited. Sometimes suddenly opens a bonus level with very different gameplay: for example, there is a level in the style of Space Invaders: need, driving a space ship moving horizontally, shoot in hanging up a monster like an octopus with kind eyes and dodging his shots (temporary restriction at levels more stringent).

The graphics in the game – only CGA, there are almost no backgrounds, but still well-drawn individual elements of the environment are present, enemies die with "explosions", which are also depicted beautifully. Prospect review – formal side, but the hero in the screen can move in all directions. The game has a breakneck pace (in fact, there need to constantly move and shoot in all directions, thus avoiding contact with the enemies) and objectively high complexity.

Today Cefalus is a huge value for collectors due to its rarity, however, is sure to be interesting and fans of complex "fast" arcade games.

PS: the Game is in Spanish, but the text is only in menu and short messages.

Relive your old memories by playing Cefalus free and online on your browser now.