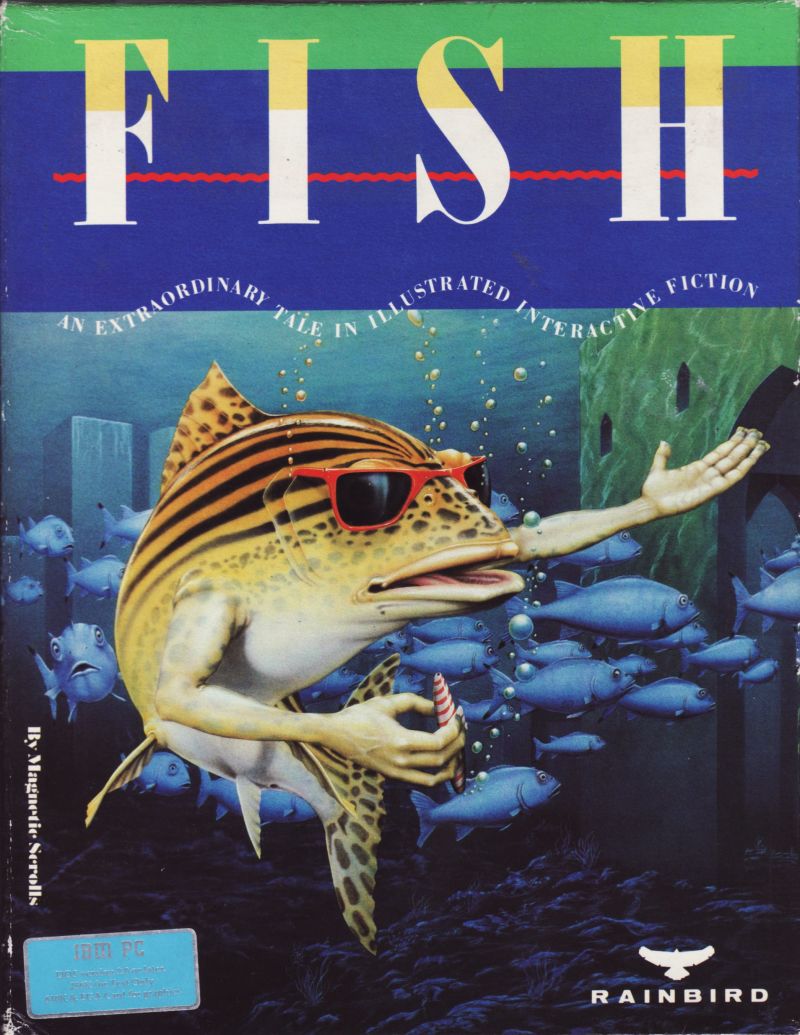 Fish, a DOS game was released by the very talented group Magnetic Scrolls in 1988. Little did they know that they will end up making history. Play this game again here.

Probably the original text adventure for the entire history if not interactive fiction per se, then at least those, which is a PostScript "with graphics" because the graphics in the game are.

To play for a goldfish aquarium and part of the super under box number 10, working for a top secret organization. It (the organization) purpose is to confront another secret organization, a very terrible evil that wants to destroy all marine life on Earth. And fish "armed" is no less secret than the place of work, the technology that allows her some time to take control of the mind of a man (quite an original explanation of how the game with such a plot to perform actions if the main character can't leave the water in the aquarium).

In General, talk about the plot more do not want, because what's the point in guessing, what and how used the people who wrote it? No, to some extent, it's probably brilliant, and can be understood only elected, but... In General, it is better to touch briefly on the point. Graphics, good or not, the game just a few screens, most of them devoid of it, but it is even more convenient. Texts that pleases, very detailed and elaborated (though positively you can evaluate the form and level of phrases as such, but hardly the contents), and the quality rare images, despite the use of four-color CGA graphics, just top notch for its time. Management is quite traditional - enter commands from the keyboard: it can be as simple verbs, and bundles of verbs with nouns; common (and accepted) is quite complicated, but in many cases they are openly simplified and flawed. Riddle level can be estimated as the average, certain difficulties will surely arise even for experienced players, but in General, everything is relatively intuitive, especially if you carefully read the texts.

Compared to other creations Magnetic Scrolls Fish looks largely like a foreign element, even as a bad joke; however, the game remember and appreciated - and sometimes even highly - appreciated to this day, and that certain charm inherent in it, of course, can not be denied. Any recommendations at this time is to abstain, but if you, as a fan of text adventures, I wanted something only "psychotic", the more unusual games you probably will not find.

Play your all-time favorite Fish free on your browser here.