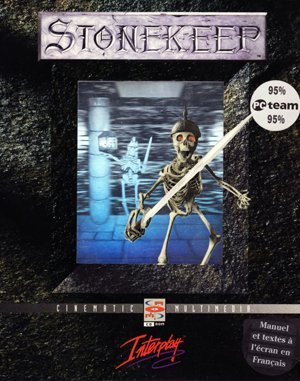 Click here to play Stonekeep online
5.0 /5
You are the sole survivor of a historic massacre. Now, years later, you return to the ruins of Stonekeep to vanquish the evil once more and free the trapped souls of those lost within its depths.

When the insane god Khull-Khuum was rampaging the world, devastating everything on his way, the only person who survived the destruction of the Stonekeep castle was a boy named Drake, saved by a mysterious figure. Play Stonekeep online!

Years later, Drake returns to the ruins of Stonekeep, and the goddess Thera extracts his spirit so that he might withstand the dangers that await him there. Drake must avenge his past, and find a way to liberate the benevolent gods of the realm.

Stonekeep is a dungeon-crawling role-playing game with real-time combat. The entire game is spent underground. There is no character creation; Drake’s initial statistics are pre-set. Over the course of the game, up to three other characters will join the party and help Drake in combat, controlled by the computer AI. Drake becomes stronger by repeatedly fighting with a particular type of weapon. Magic is contained within runes, which must be found and equipped on staves. Spells can also be combined by the player to produce various offensive and supportive effects. The game utilizes digitized pictures and animations of live actors to represent characters.

Stonekeep includes an in game map, separating it from a previous generation of dungeon crawlers that included the making of a real-world map as a quirk of the genre.

Movement is tile based.

Left and Right mouse buttons correspond to attacks with left and right hands.

You can play Stonekeep online here, in web browser for free!

Inherit the Earth: Quest for the Orb

Realm of the Paladin: Deception’s Plague