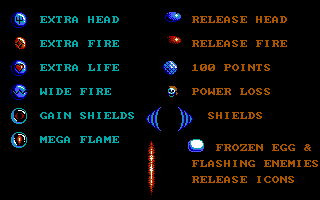 Click here to play Dragon Spirit, developed by Domark Software Ltd. in 1991. The game is a high quality Top-down perspective game with an amazing Shooter experience.

Arcade dragon simulator – confirmation that DragonStrike is not unique on the subject of the game.

Plot: the demon Galda (aka Zawel) kidnapped Iris, sister Lace'and, your hero, who can transform into a dragon. The demon at all this bears far-reaching plans for the world, and the task Lace'and to stop him at any cost.

At first glance – this is a common letalka from the top view, where instead of manmade aircraft under our control a dragon. In some sense this is true, but only partly, since the game has lots of interesting features.

The original dragon has only one head (which seems to be OK – after all, most dragons are real) and a very weak jet of fire, his only weapon (which is somewhat frustrating). To eliminate the cause of the disturbance is necessary to collect bonuses, including just is very interesting to be able to grow a second or even a third head, which greatly increase the power of our dragon.

Types of bonuses a lot, some restore health, others increase the speed, others increase the power of the jet of fire spewing from the mouth, and there are even some with which you can use for a while to call the two "helpers" - other dragons that will fight with us. But be careful – in this game there are bad bonuses that take health and speed, and they should be avoided.

Difficulty levels a few, and if you complete the game on one, then offer to go through all the same, but more difficult (the difficulty levels are called dragons by color – blue, Golden and so on). And if the player loses on hard, then he again gives to play with light. In one of the reviews on the game said that when you perform certain actions during the game to ensure that the sister somehow helped you in the rescue, but I could not open.

The enemies in the game, unfortunately, not a great variety. Only nine levels, there are bosses, but all this looks at the General background like something more subtle. But the landscape was very beautifully drawn and really varied, and the figure of the dragon is also done very well, so to schedule no complaints. Verdict – a great game on a beautiful theme, one of the very few where you can not just ride the dragon, but also to identify with him, though not unique in gameplay, but very fun. So it is recommended to all fans of the trivial "flat" of music and lovers of scaly winged creatures – even more so.

Now, play Dragon Spirit online for free on your browser and make your boring weekend fun and full of entertainment.