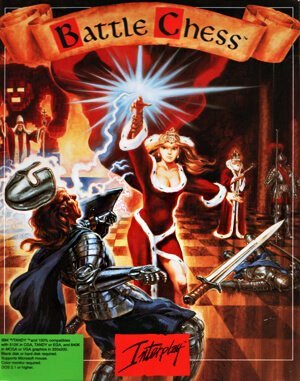 Click here to play Battle Chess online
3.8 /5
Battle Chess follows the same rules as traditional chess; the battles always play out so that the capturing piece defeats its target. Since there are six types of pieces for each color, and a king cannot capture a king, there are 35 battle animations. The rook, for example, turns into a rock monster and kills a pawn by smashing his head. There are some pop-culture homages; the knight versus knight animation references the black knight fight in Monty Python and the Holy Grail , and the king versus bishop fight pastiches the short battle between Indiana Jones and a swordsman in Raiders of the Lost Ark.

Battle Chess is a video game version of chess in which the chess pieces come to life and battle one another when capturing. Play Battle Chess online!

Battle Chess is a quite typical chess game, but it comes with a twist: all pieces are represented by small, realistic figures that walk around on the chessboard, and when one piece takes another, they both take part in an animated battle. There is a different animation for each permutation, depending on which pieces are capturing or being captured. You can also play in 2D without animation.

Battle Chess has been quoted as “a chess game for people who don’t like chess”. Each piece is brought to life by adding comical animations to them, moving across the board and violently attacking one another.

Depending what piece attacks which, different attack comes into play. For example: if the player takes a knight with a knight he will cut his enemy limb from limb until all that is left is a bloody mess; however, if the player’s knight gets close enough to take the queen he will cleverly dodge her incoming attacks and deflect her magic back upon her.

The game’s opening library includes 30,000 different moves, ensuring a variety of games will unfold across the 10 skill levels.

The game can be also played in a 2D version with no animations, and the Amiga CDTV version features a fully voiced introduction describing the movements of the pieces for the benefit of beginners. Digitized sound is utilized in the DOS version for all battle sound effects and is played through the PC speaker, without the need for a sound card, using a technique akin to RealSound.

Battle Chess could be played against a human opponent or against the computer’s artificial intelligence.

You can play Battle Chess online here, in web browser for free!

Shiloh: Grant’s Trial in the West